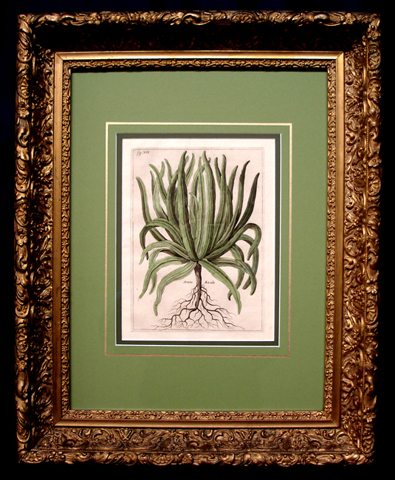 Giacomo Zanoni was a curator, apothecary, skillful herbalist, collector of rarities, and professor of botany. He served as the superintendent of the botanical garden at the University of Bologna, which was founded in 1567. This garden, known as the Botanical Garden of Bologna, was a very prominent Italian scientific garden. In 1675, Zanoni published his “Istoria Botanica”, which displayed the collection of exotic plants found in the garden. Gaetano Monti, who would direct the garden in the latter part of the 18th Century, translated into Latin Zanoni’s work and enlarged upon it, more than doubling the number of the original plates. Monti’s work was titled “Rariorum Stirpium historia”, and was published in 1742. Zanoni’s original edition was in Italian text, contained 80 plates, with some descriptions of tropical plants and novel identifications of plants described by Dioscorides and Pliny. Zanoni’s works were particularly nice, as they depicted the entire plant, including the roots. They are admired for their beautifully engraved borders surrounding the image, which was unusual for this time.
These prints are from Zanoni’s (First Edition) Istoria Botanica published in 1675, unless otherwise noted