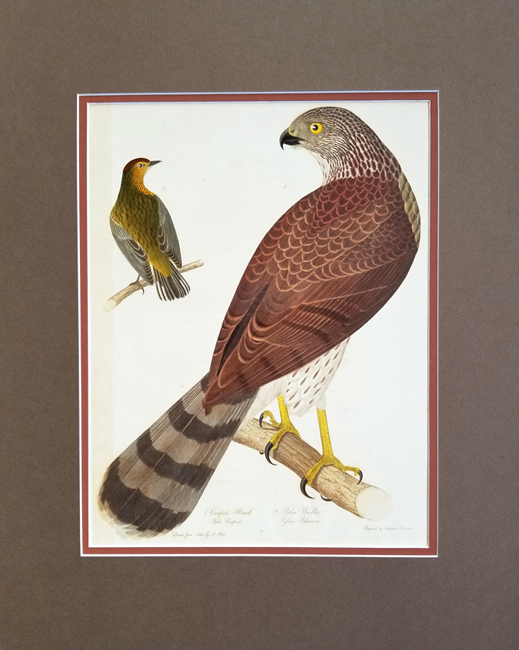 Alexander Wilson was born in Scotland, the son of a poor distiller, and was apprenticed as a weaver. An imaginative youth, his first love was poetry, and he soon renounced his humdrum life for the lure of adventure and prosperity in the new world. Arriving in America in 1794, he settled near the cultural mecca of the day, Philadelphia, finding work as a teacher. He met William Bartram, the American naturalist and artist, who encouraged Wilsons interest in ornithology. So inspired, Wilson taught himself to draw and embarked on the work that was not only to take the rest of his life, but also predated Audubon’s “Birds of America”. Wilson spent ten years of his life traveling widely in the eastern United States, discovering 26 previously unknown species. In the next hundred years, only 23 more American land birds would be identified. The first edition of “American Ornithology” was printed from 1808-1814 and was an outstanding contribution to the world of ornithology as the first work on American birds, printed in America. Sadly, Wilson died in 1813 before the completion of the publication and it was completed by George Ord. This first edition was published on a poor-quality paper due to financial constraints. Fifteen years later, due to the success of the work, the financing was available to publish an edition on high quality paper with superior hand coloring. The same copper plates were used, so the edition is identical from the perspective of the images and the historical significance of the work, with the added benefit of being highly decorative due to the superior hand coloring.