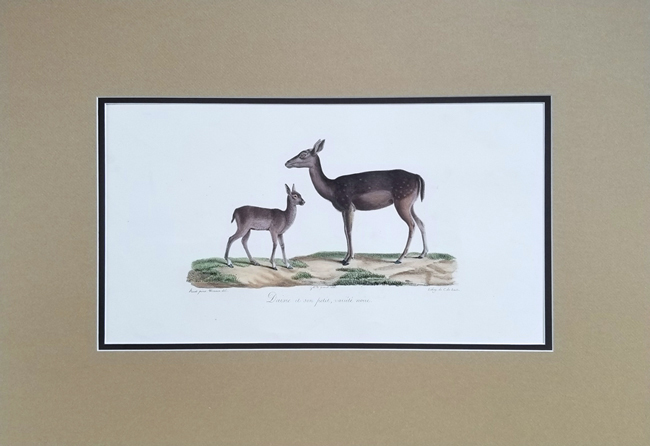 Geoffrey St. Hilaire was a French zoologist, however he also received a law degree in 1790, and went on to study medicine and science. He was appointed professor of vertebrate zoology at the Museum of Natural History, and in 1795 invited Georges Cuvier to join the staff where the two collaborated on several research projects. Georges Cuvier was a naturalist and one of the most important scientists of the day. He is credited with founding the discipline of vertebrate paleontology, and creating the comparative method of organismal biology. Together, St. Hilaire and Cuvier published their monumental work, “Histoire Naturelle des Mammifers avec les figures originales d’apres des animaux vivants” (Natural History of Mammals with original pictures after living animals), in Paris from 1819-1842. The work consisted of four volumes, and contained 430 hand colored lithographs of mammals. It was among the most important works produced in the early 19th Century on the study and classification of animals. The majority of the plates were after the original drawings of Jean Charles Werner. Werner was a natural history illustrator for the Museum of Natural History in Paris. Some of the plates in the publication bear a round blind stamp with the letters “CB”.

Prints from this publication are very rare, and feature fine original hand coloring.