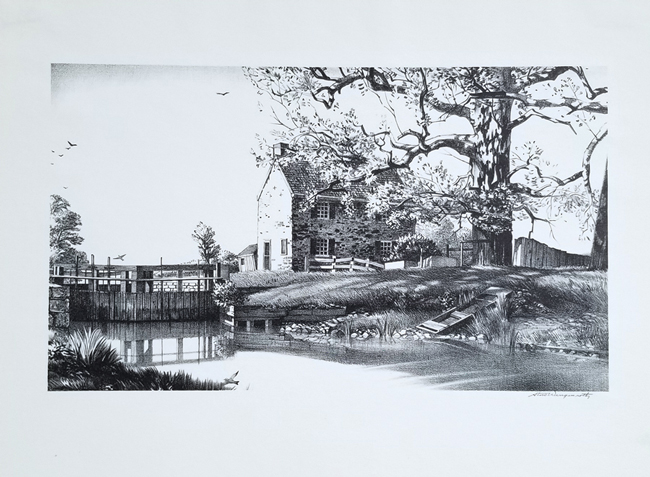 Born in Brooklyn at the turn of the century, Stow Wengenroth was the only child of an architect and a textile designer. Stow moved into the artistic realm of his parents only during his last year in high school. He then studied at the Grand Central School of Art under Wayman Adams. However, he did not start working with his trademark medium until 1930, when another mentor, George Pearse Ennis, whom he met at the Eastport Summer School of Art, suggested he try lithography.
Although he traveled to Europe, Wengenroth moved between New York and Maine and it was their city and sea scapes that acted as his inspiration. Sand dunes, trees, lighthouses, and the occasional towering skyline were the themes for his work presented in shows in New York galleries such as the Kennedy and Macbeth, as well as the Whitney museum. From his start with lithography in the 1930’s, Stow flourished in printing, publishing, and exhibiting his works for two decades; he was one of the only artists of his time to support himself with his prints alone. In 1938 he became an associate member then a full member in 1941 of the National Academy of Design. Wengenroth also exhibited his work at the 1939 Worlds Fair. All was well received and he was renowned for his mastery of the black and white medium, his ability to create heavy moods with his cool shadows and quiet highlights. In 1978 his emphysema ended his life, leaving 369 prints behind, only one of which was damaged during the process, a fact that demonstrates his attention to detail and careful precision that is so evident in his prints. Wengenroth was once called “America’s greatest living artist working in black and white” by the American realist painter Andrew Wyeth.