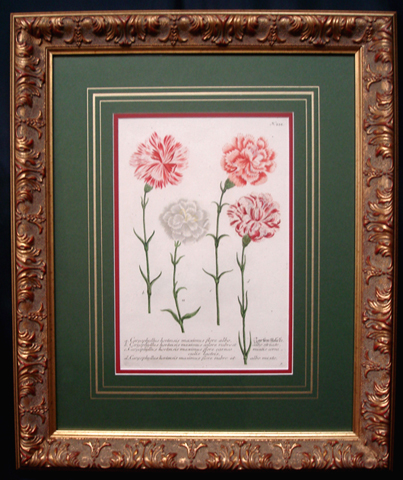 Johann Wilhelm Weinmann was a prominent apothecary in Regensberg, however is most famous for his monumental work, the “Phytanthoza Iconographia”. It was a comprehensive floralegia depicting plants, trees, fruit, herbs, nuts, vegetables and succulents, and is one of the most significant illustrated botanical works published in the 18th Century. It was one of the earliest works to use color printing from a single plate, and certainly the first botanical work to successfully utilize the technique. The mezzotint technology permitted the depiction of the shade and tone of a drawing, as well as of line. The “Phytanthoza Iconographia” was based on Weinmann’s own collection of plants, and comprises a record of the flowers, fruits and vegetables grown in Europe in the early 1700’s, including a quantity of exotic plants. There are over 4,000 plants, depicted on a total of 1,025 plates. The plates are after original botanical illustrations, mostly by Georg Dionysius Ehret and N. Asamin, and engraved by B. Seuter, J.E. Ridinger, and J.J. Haid. Although the artists and engravers are barely credited in the work itself, this publication is important from an artistic viewpoint, as it is the first publication to contain the work of Georg Ehret. Ehret served his apprenticeship as a botanical draughtsman under Weinmann, who exploited him mercilessly and paid him pittance for the several hundred illustrations he did. This ended Ehret’s contribution to the project. Nonetheless, through his association with Trew, Ehret went on to illustrate the “Hortus Nitidissimus”, the “Plantae Selectae”, and to be acclaimed one of the greatest of all floral painters. One of the engravers for Weinmann’s work, Johann Jacob Haid, also went on to have a fruitful association with Trew and Ehret, engraving the plates for the notable work “Plantae Selectae”. With the talents of such artists as these, Weinmann’s “Phyanthoza Iconographia” was a great success and important botanical work.

Generally, prints from this publication are rare, however, in some instances can be extremely rare depending on the image/subject matter. The plates are beautifully printed in color and finished by hand.