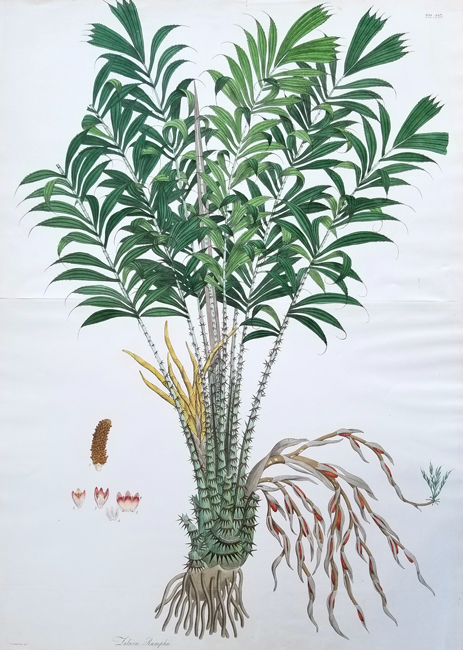 Nathaniel Wallich was a renowned Danish physician, botanist and plant explorer. He traveled to Nepal, Western Hindostan, Ava and Lower Burma in search of exotic flora and fauna, and was responsible for introducing numerous Himalayan plant specimens to Europe. Ardently interested in the indigenous plants of India, where he was appointed Superintendent of the East India Company’s Botanical Garden at Calcultta from 1817-1846, he began vigorously collecting and cataloguing specimens, and helped found the Oriental Museum of the Asiatic Society (later called the Indian Museum in Calcutta). In 1828 Wallich took a leave of absence due to ill health and returned to England, bringing with him a collection of about 8000 dried specimens and 1200 original watercolor drawings from which he prepared the publication Plantae Asiaticae Rariories. The work was published between 1829-1832, which was undertaken with the enthusiastic patronage of the East India Company. For this work he employed artists including Vishnupersaud (or Vishnu Prasad), who Blunt considered the most talented of the native Indian artists. Maxim Gauci, perhaps the greatest of the early lithographers of botanical subjects, was responsible for translating the drawings onto stone. There were a total of 293 lithographs in the work, including one fold-out print plate.

Prints from this publication are very rare, especially this fold out or double print, which is the only one in the publication.