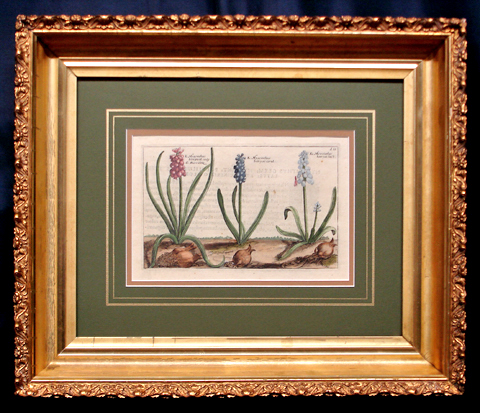 Crispin Van de Passe was an engraver, draughtsman, print publisher and writer. His father was also a well known engraver, and Crispin often assisted him in his productions as well. His work is close in style to that of his father, but his prints of the 1620’s and 1630’s began to be distinguishable by a remarkably fine, sketchy use of the burin. Van de Passe was very well known for his portrait work of European rulers and their families, scholars and statesmen, as well as for his work “Hortus Floridus”, which he designed and engraved most of the plates for. This work, published in Amsterdam between 1614-1616, was one of the first, and is considered the most famous and influential of the early Florilegia. It contained five parts in one volume. In the main section of the book, the plates are arranged according to the seasons, and an additional part primarily depicting tuberous or bulbous plants. The majority of the plates were engraved by Crispin Van de Passe, however, his brothers were known to have assisted as well. The work was originally published in Latin, with later editions having French, Dutch and English translations.

Prints from this publication are extremely rare, and feature early hand coloring.