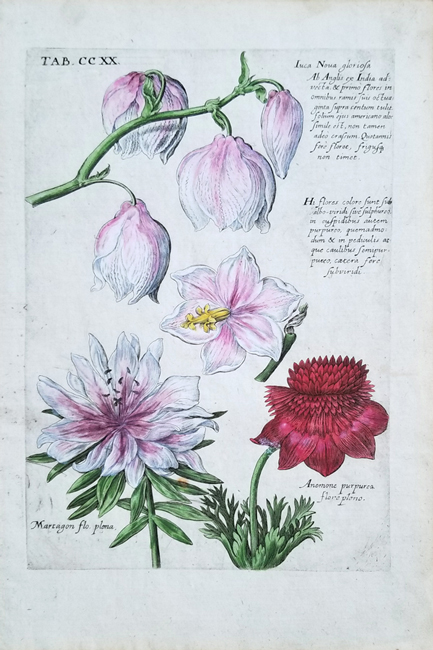 Michael Bernhard Valentini was a physician, professor of medicine and collector of natural history specimens. In 1719 he published “Viridarium Reformatum”. This publication was in large part based upon the “Florilegium renovatum et auctum” published in 1641 by Johann Theodor de Bry and his son-in-law Matthaus Merian, which was in turn based upon de Bry’s earlier work “Florilegium novum”, published in 1611. Along with his own plates, De Bry’s original work included plates copied from other leading botanical artists of the day, including Vallet, Besler, and Van de Passe. Valentini had acquired the actual engraved plates from de Bry and Merian’s 1641 work, however in his edition, he also added engraved plates after the works of Mattioli, Bauhin and others. His selection of plates is in the spirit of the “collector’s cabinet” of natural history samples, intended, as his title page proclaims, a “botanical library”. His text gives a detailed catalogue of the plants illustrated and other varieties, citing pictorial and textual sources.