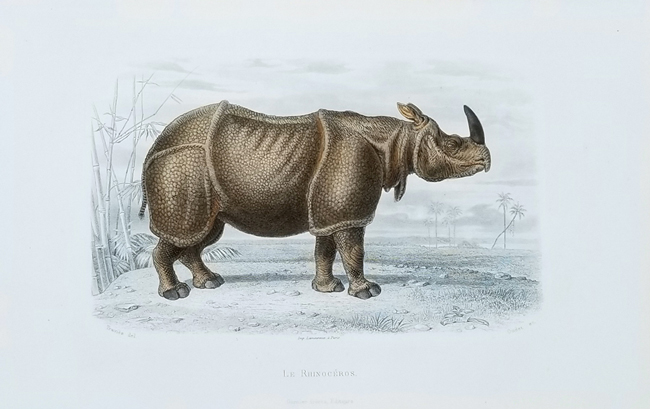 Edouard Travies was born in Doullens, France in 1809. Throughout his career he concentrated on natural history subjects which he portrayed through watercolor and lithography, frequently lithographing his own work. Travies artwork was exhibited regularly at the Paris Salon between 1831 and 1866. While his ornithological drawings were considered to be some of the finest ever produced, Travies also illustrated other types of land and marine animals. He was among the earliest artists to place his natural history renderings in the context of the animal’s natural habitat. Travies’ original drawings were reproduced as both engravings and lithographs. When producing his own printed works, Travies always chose to use lithography, while other artists who made use of the drawings often opted for copper plate engravings. Engravings, mostly by Guyard Fournier, produced from his illustrations were featured in the Ornithology section of Georges Cuviers publication “Le Regne Animal”. His own greatest published work was “Les Oiseaux Les Plus Remarquables par leurs formes et leurs couleurs”, which was published simultaneously in Paris and London circa 1857. His illustrations describe the species of birds native to Central and South America, showing the birds in association with flowering plants indigenous to their habitats, such as orchids and passion flowers.

Prints from this publication are quite detailed and feature original hand coloring.