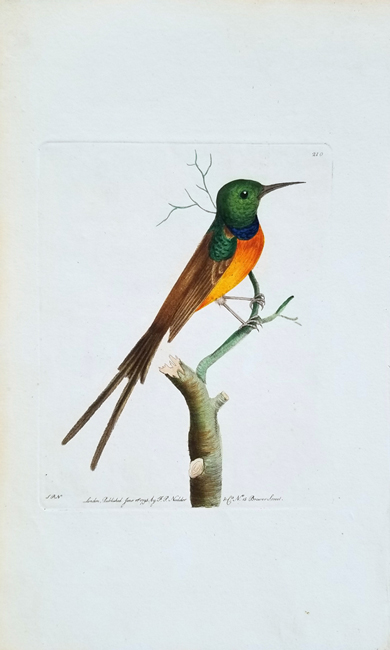 George Shaw was a medical practitioner, lecturer of botany at Oxford University, and founder of the Linnean Society of London. He was responsible for writing the text for this work. Frederick Nodder was a British natural history artist who illustrated both plants and animals, and worked on many other publications, including Banks “Florilegium”. The Naturalists Miscellany was an extensive work by Shaw and Nodder that originally produced 24 volumes, and was issued monthly from 1789-1813. It is notable for its huge variety of animals, and contained over 1063 hand colored prints.He was responsible for drawing and engraving the plates for this work. After his death in 1800, his son completed the illustrations. “The Naturalist’s Miscellany” was highly coveted as a definitive Natural History offering, and was aptly named as a diverse naturalists’ compendium of the birds, mammals, reptiles, insects, fish, and crustacean, as well as botanical, microscopic and deep sea marine life, discovered and documented by the late 17th and 18th Century naturalists and explorers around the globe, particularly in and around Australia, New Zealand and the South Seas. George Shaw contributed the text, in both English and Latin, from 1790 to his death in 1813, while Frederick Nodder, and later his son Ralph, beautifully illustrated the finely hand-colored copperplate engravings.