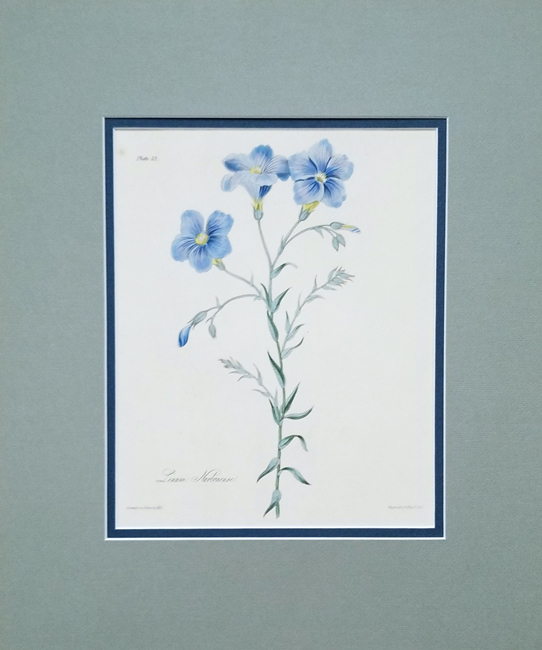 Margaret Lace Roscoe was an English botanical illustrator. She contributed illustrations to one of the early lithographed botanical books “Monandrian Plants of the Order Scitamae” (1824-29) written by her father-in-law William Roscoe, a botanist and patron of the arts and sciences in Liverpool. Her major work was “Floral Illustrations of the Seasons” (1829), engraved by master aquatintist Robert Havell. She explained her objective for the collection as follows: “There is no pursuit which fills the mind with more noble and exalted sentiments than the study of these works of Nature. To her own sex, to whose particular notice she offers it, she trusts it may prove a useful and correct guide to their tastes, both in their selection for a flower garden, and as objects for their pencil.”

Robert Havell Sr. (1769-1832) was a painter, engraver and publisher. He taught the trade to his son Robert Havell Jr. (1793-1878) and set up business with him in London. They were involved in the production of John James Audubon’s “Birds of America”. The younger Havell engraved 425 of the plates and the elder printed and colored some of the double-elephant folio sheets in 1827 to 1828, after which Havell Jr. took on those tasks himself, establishing himself as a master of aquatint. In 1839, the younger Havell went to the United States at the invitation of Audubon and established himself as a landscape painter of the Hudson River school, also producing aquatints after his paintings. He lived in Ossining and Tarrytown and traveled throughout the Northeast, sketching views which he translated into oil paintings and engravings at home. Perhaps his best known aquatint is Niagara Falls from the Chinese Pagoda, which he engraved after one of his paintings. His works are in the collections of the Los Angeles County Museum of Art, Metropolitan Museum of Art, The White House, the New York Historical Society and many others.