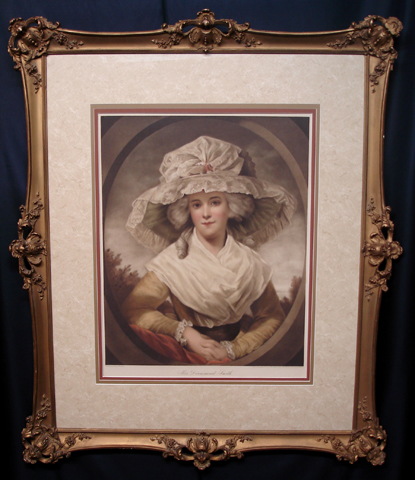 Romney was born in Beckside in Dalton-in-Furness, Lancashire (now part of Cumbria), the 3rd son of 11 children of John Romney, a cabinet maker, and Anne Simpson. He was sent to school at Dendron, but appears to have been an indifferent student and was withdrawn at the age of 11 and apprenticed to his father’s business instead. He proved to have a natural ability for drawing and making things from wood, including violins which he played throughout his life. From the age of 15, he was taught art informally by a local watchmaker called John Williamson, but his studies began in earnest in 1755, when he went to Kendal, at the age of 21, for a 4-year apprenticeship with local artist Christopher Steele, a portraitist who had himself studied with distinguished French artist Carlo Vanloo. In October 1756, Romney married Mary Abbot, but the couple were immediately separated when he was called away to York on business by his employer. After a year, Steele eventually agreed to cancel the apprenticeship, at George’s request, leaving the young artist, now a father of a son, free to pursue his own career as a painter.