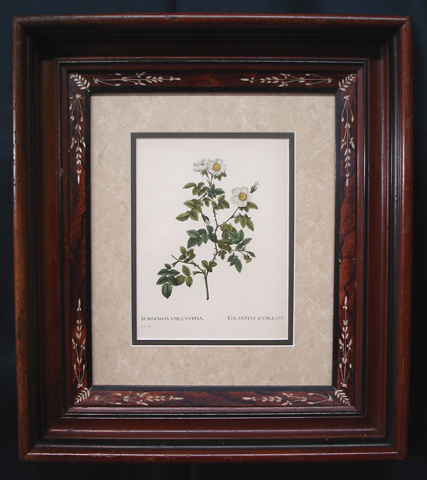 Redoute was a very well known Belgian botanical artist in the 1700 and 1800’s. As a young artist, he became acquainted with the work of Dutch flower painters such as Brueghel, Ruysch, van Huysum and de Heem, and was determined to produce works in the same tradition. Redoute moved to Paris in 1782, where he met the botanist Charles Louis L’Heritier de Brutelle who greatly influenced his work and life. Redoute became a very successful, renowned botanical artist, working for the Empress Josephine as well as serving as official court artist to Queen Marie Antoinette. He was particularly well known for his botanical explorations of roses and lilies, however also produced other paintings purely for aesthetic purposes. In “Les Roses”, Redoute created images devoted to the Empress Josephine’s favorite flower. These plates described almost all of the important roses known to botany. Included are many of the key ancestors of our present-day flowers. The plates of “Les Roses” constitute an important work of both botanical art and natural history, documenting the species and cultivars still surviving, as well as those that have disappeared.

Prints from this publication are very rare and are printed in color, finished by hand.