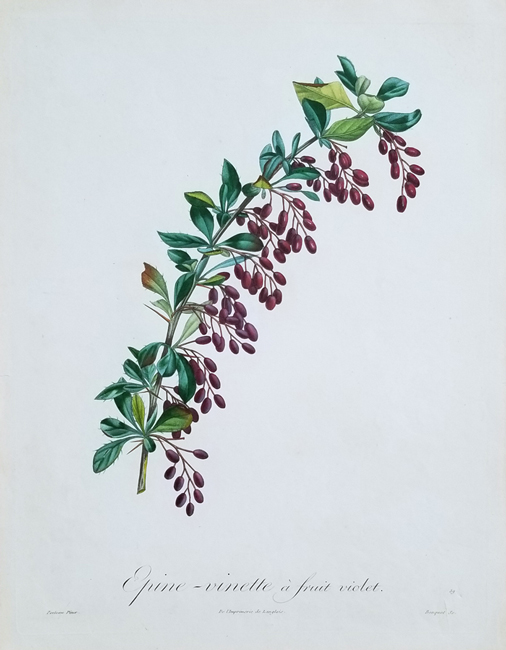 Pierre Antoine Poiteau was a French botanist, gardener and botanical artist. He was born in Ambleny, France. After having worked in kitchen gardens and for the Parisian market gardeners, he was appointed by André Thouin (1746-1824), garçon jardinier, in 1790 at the Muséum national d’Histoire naturelle of Paris. There he studied the Linnaeus’ Systema vegetabilium and the art of painting with the artist of the museum, Gérard van Spaendonck (1746-1822), but his main influence was Redouté (1759-1840). In 1802, he brought back to France from Haiti six hundred packets of seeds and 1,200 species, all named and classified by him. He published Flora Parisiensis secundum systema sexuale deposita et plantarum circa Lutetiam sponte nascentium descriptiones, icones….in Paris in 1808 with Pierre Jean François Turpin (1775-1840), whom he met in Haiti. After some years of free literary activities, he was appointed in 1815 head of the Royal tree nursery of Versailles. In 1816, he published a description of the plants cultivated in the botanical garden of the School of medicine of Paris. Two years later, with Antoine Risso (1777-1845), he published Histoire naturelle des orangers (Natural history of the orange trees). From 1829 to 1851 he directed the Revue horticole (Horticultural review). In 1835, with Pierre-Jean-François Turpin, he published a new edition of the Traité des arbres fruitiers (Treatise of the fruit trees) by Henri Louis Duhamel du Monceau (1700-1782), and in 1846, Pomologie française Recueil des plus beaux fruits cultivés en France… (French pomology). In 1848 and 1853 the two volumes of his Cours d’horticulture (Lessons of horticulture) were published. As a gardener and a pomologist, he much contributed to the amelioration of the edible fruits. As an artist, he is often compared to Pierre-Joseph Redouté.