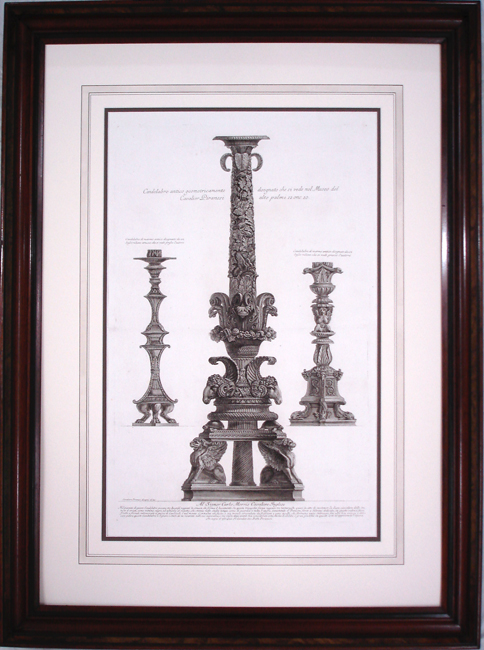 Giovanni Battista Piranesi was one of the leading figures in the development of the neoclassical style in the late 18th Century. As architect, archeologist artist, designer, collector, and antiquities dealer, he and his son Francesco produced a series of etchings and engravings depicting the glories of ancient Rome. These fine prints served as source material for other architects and designers, such as his colleague, the great English neoclassical architect, Robert Adam, and were souvenirs for other English aristocrats on the Grand Tour in Italy. Piranesi published numerous architectural and archaeological works from 1743 until his death. One such famous work was “Vasi, Candelabri, Cippi, Sarcophagi, Tripodi Lucerne, et Ornamenti Antichi”. This was a collection of 110 etchings documenting large sculptural vases and other antiquities excavated in Italy in the 18th century, as well as Piranesi’s own confections. The plates in “Vasi” often included text by Piranesi with information about where the objects were discovered and their contemporary location. The prints bore dedications to his patrons, colleagues, visitors and influential people. Initially the prints were separately issued and sold by Piranesi over a period of several years and subsequently collected in two folio volumes, each with its own title page, in 1778.

Prints from this publication are quite large, and are Very Rare