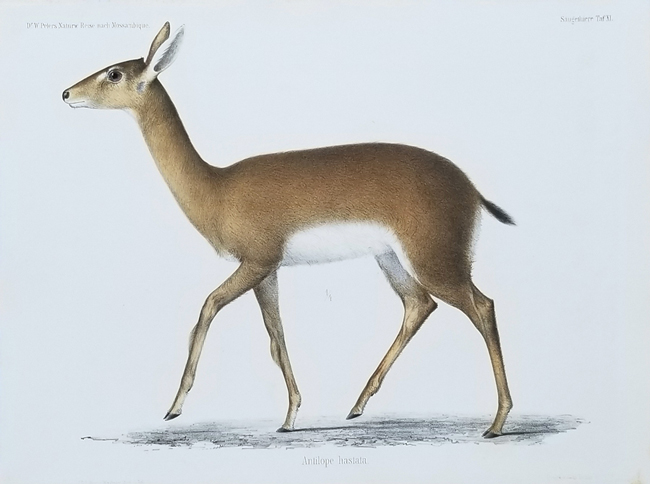 Dr. Wilhelm Karl Hartwich Peters was a German editor, naturalist and explorer. He was assistant to physiologist Johannes Peter Muller, and in 1858 he replaced Martin Lichtenstein as curator of the Berlin Zoological Museum. Peters’ plan to undertake an exploration of Mozambique was supported by Müller and by Alexander von Humboldt, so Peters took part of a natural history expedition in September 1842, traveling to Mozambique via Angola. This expedition was the crowning achievement of his career. He explored the entire coastal region and spent nearly a year up the Zambezi River deep in the interior, and he returned with enormous collections of natural history specimens, which he described, in this pioneering illustrated series of volumes Naturwissenschaftliche Reise nach Mossambique. The illustrations, lithographed by J.D.L (Johann Daniel Lebrecht) Franz Wagner, a German painter of the day, possess striking realism, posed with no trace of anthropomorphism. As a staunch supporter of the Darwinian evolution theory, Peters united anatomical and zoological research in his work. Peters’ work is admired for its scientific rigor and comprehensiveness, covering mammals, birds, reptiles, amphibians, river fish, insects and botany. His specialty was herpetology, to which he contributed the description of 122 new genera and 649 species from around the world, about 65% of which are still considered valid today.

Prints from this Publication are Rare hand colored lithographs