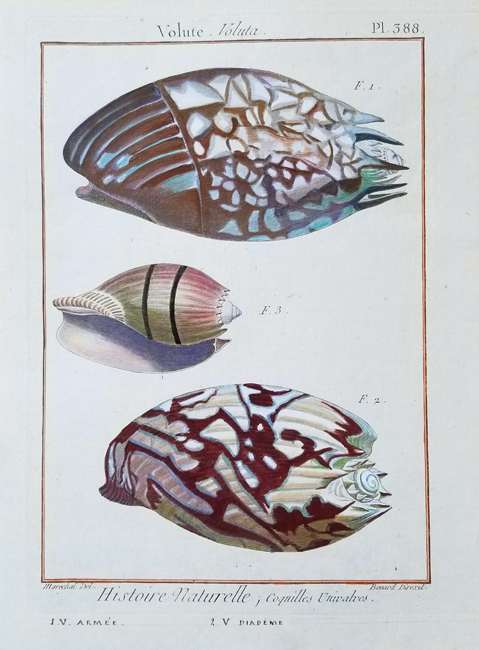 Charles Joseph Panckoucke, a French writer and publisher, was born in Lille in 1736, and settled in Paris in 1754. His greatest achievement was the “Encyclopedie Methodique para ordre de matieres” which was published from 1782-1832. This was a revised and expanded version, arranged by subject matter, of the originally alphabetically arranged “Encyclopedie” compiled by Diderot. The work was published by Panckoucke from 1782-1794, continued by his son-in-law Henri Agasse from 1794-1813, and completed by Panckoucke’s daughter (and Agasse’s widow) Therese-Charlotte Agasse from 1813-1832. Panckoucke enlisted the best specialists of the time to edit each sub-category, whereas each would be responsible for collecting all information related to his subject. Some of the contributing editors included Bonnaterre for Ornithology and Fish, and Lamarck for Botany and Shells. Also called upon were some of the best engravers of the day to illustrate the work, including Benard, Redoute, Favanne and Marechal. These prints are from the “Histoire Naturelle” volume of the “Encyclopedie…”, published in Paris in 1782.