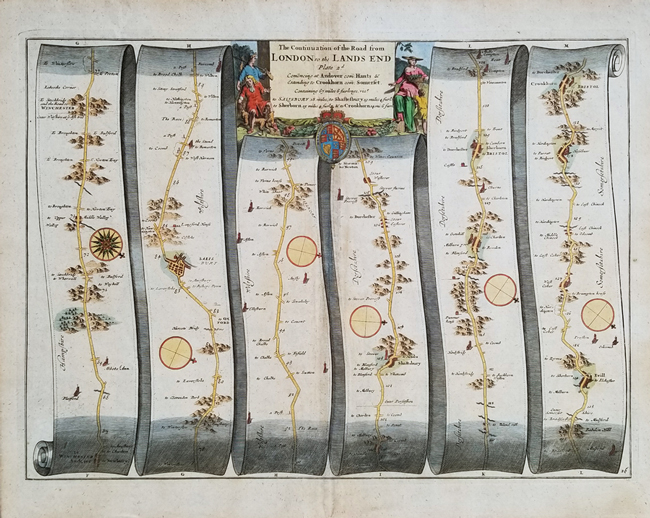 John Ogilby was born into a wealthy family near Edinburgh, Scotland in 1600.As a child, the family moved to London, where his father was subsequently imprisoned for bankruptcy. This resulted in John becoming apprenticed to a dance master, through which he was able to obtain enough money to secure his father’s release.Having high aspirations, Ogilby was soon dancing at Court, and thus was noticed by Thomas Wentworth, Earl of Strafford, who took him to Ireland to be tutor to his children. Whilst in Dublin, Ogilby established the Theatre Royal which was hugely successful until the advent of the Civil War, which caused him to return to England a pauper.John settled in Cambridge, where he became accomplished in Latin and Greek, and proceeded to translate Virgil into English. He then enjoyed many years of success, having the favour of Charles II, until misfortune struck again when his home and all his wordly goods were destroyed by the Great Fire of London in 1666. This turned out, however, to be a blessing in disguise as he was chosen to be a ‘Sworn Viewer’ – tasked with surveying the ruined city and determining rights of ownership prior to the fire. This provided him with the funding to rebuild his home and set up a printing company, which allowed him to publish, amongst other books, atlases of the world.The popularity of these atlases spurred Ogilby on further, and in 1672 he set about creating his masterpiece – ‘Britannia’ – a road atlas of the major highways of England and Wales, the first road map to be published in Europe. With doing so, he standardised the British Mile to 1,760 yards, and became ‘Royal Cosmographer and Printer’, before his death in 1676.

Ogilby maps are becoming quite rare