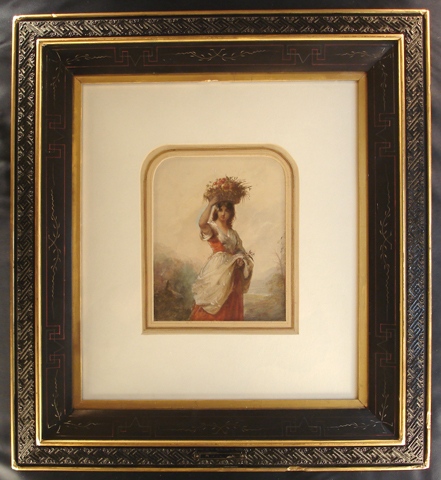 Alfred Jacob Miller was born and raised in Baltimore, Maryland. He showed an artistic ability from a young age, and was encouraged to draw by his affluent parents, who supported his training. From 1831-1832, he studied portraiture with Thomas Sully, a prominent Philadelphia painter. Under the tutelage of Sully, Miller attracted the attention of local Baltimore patrons Robert Gilmor and Johns Hopkins. He did portraits of Johns Hopkins and his mother during this time that today still hang in the president’s office at the Johns Hopkins University. Gilmore and Hopkins sponsored Miller’s educational travels to Europe where he trained in Paris at the Ecole des Beaux-Arts, and in Rome at the English Life School. Upon his return, Miller opened a portrait studio in Baltimore, but his lack of success caused him to move to New Orleans, where he tried to make a living as a portrait painter. It was here where he met Capt. William Drummond Stewart of the British Army, when he visited his studio. In 1837, Stewart hired Miller to accompany him on an expedition to the Rocky Mountains, as artist to record the journey. Miller became the first artist of his generation to explore the Rocky Mountains and the American West. The route they traveled by wagon later was to be designated as the Oregon Trail. They attended one of the last annual fur trapper’s rendezvous along the Green River, in what is now known as Wyoming. Miller sketched approximately 200 scenes depicting experiences from their journey, mostly of the mountain men, Indian life and interaction between the trappers and the Indians. Upon his return, Miller converted his sketches to oil paintings. In 1838, Stewart invited Miller to Scotland to stay at his home, Murthly Castle, to help redecorate it with paintings of his favorite scenes from the trip. He arrived in 1839 and stayed for two years. Prior to leaving, however, Miller arranged a showing of his art in New York City in the spring of 1839. The showing was successful, as for many it was the first images of the Rocky Mountains and the Indians they had ever seen. Upon Miller’s return from Scotland, he moved back to his native Baltimore where he remained until his death, painting portraits and producing watercolors and oil paintings of his western scenes. Alfred Jacob Miller is a highly listed American artist.

Alfred Jacob Miller’s works are extremely rare, and are beautifully detailed. They are rarely offered for sale.