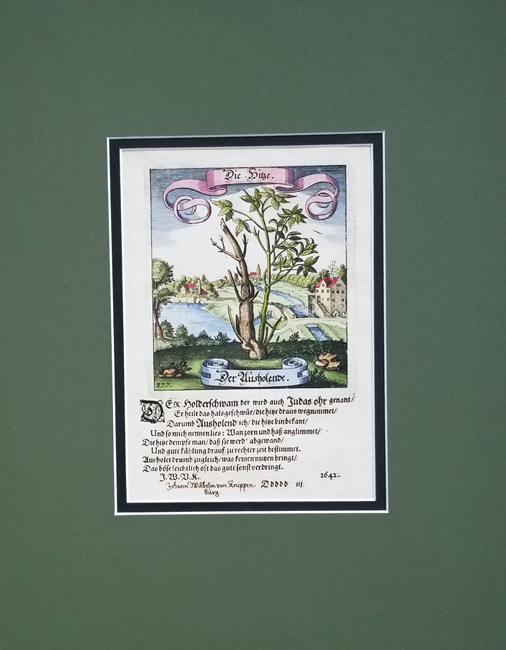 Born in Basel, Merian learned the art of copperplate engraving in Zürich. He next worked and studied in Strasbourg, Nancy, and Paris, before returning to Basel in 1615. The following year he moved to Frankfurt, Germany where he worked for the publisher Johann Theodor de Bry, who was the son of renowned engraver and traveler Theodor de Bry.In 1617, Merian married Maria Magdalena de Bry, daughter of the publisher. In 1620 they moved back to Basel, but three years later returned to Frankfurt. They had numerous children together, including a daughter, Anna Maria Sibylla Merian, born in 1647. She became a pioneering naturalist and illustrator. Two of their sons followed Merian into publishing.In 1623 Merian took over the publishing house of his father-in-law after de Bry’s death. In 1626 he became a citizen of Frankfurt and could henceforth work as an independent publisher. He spent most of his working life in Frankfurt.Early in his life, he had created detailed town plans in his unique style, e.g. a plan of Basel (1615) and a plan of Paris (1615). With Martin Zeiler (1589 – 1661), a German geographer, and later (circa 1640) with his own son, Matthäus Merian (der Jüngere, i.e. “the Younger” or “Jr.”) (1621 – 1687), he produced a series of Topographia. The 21-volume set was collectively known as the Topographia Germaniae. It includes numerous town plans and views, as well as maps of most countries and a World Mapit was such a popular work that it was re-issued in many editions. He also took over and completed the later parts and editions of the Grand Voyages and Petits Voyages, originally started by de Bry in 1590.Merian’s work inspired the Suecia Antiqua et Hodierna by Erik Dahlberg. The German travel magazine Merian is named after him.Matthäus Merian died after several years of illness in 1650 in Bad Schwalbach, near Wiesbaden.After his death, his sons Matthäus Jr. and Caspar took over the publishing house. They continued publishing the Topographia Germaniae and the Theatrum Europaeum under the name Merian

Prints from this are quite rare