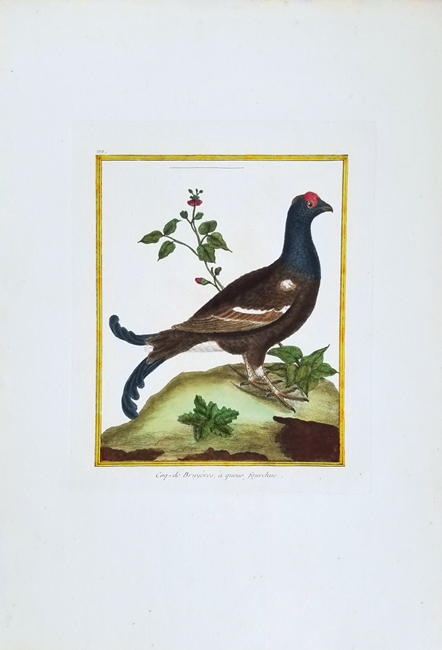 Francois Nicolas Martinet was trained as an engineer and draughtsman, however became a famous and well-respected illustrator and engraver in the 18th century. His illustrations and engravings were used by some of the most influential ornithologists, such as Francois Salerne, Mathurin Jacques Brisson, and Georges Louis Leclerc (le Comte de Buffon) in many of their important works, including arguably the most influential of all bird books, Comte de Buffon’s gorgeous work on the birds of the world, the “Histoire Naturelle Des Oiseaux”. This highly decorated work was one of, if not the most, ambitious and comprehensive bird books of the day, featuring a broad spectrum of birds, including birds native to Europe as well as exotic tropical birds. Martinet’s finely detailed illustrations carefully depicted the birds in a realistic manner, capturing correct proportions and postures, and usually hinting at their natural habitat by including such items as a tree branch, rock or water. The plates were re-issued separately on large folio paper between 1765 and 1783 by the publisher Panckoucke, without text, as “Les planches enluminees”.
In the 1770’s, Martinet also set out independently to produce his own plates in a collection entitled “Histoire des Oiseaux, Peints dans Tous Leurs Aspects Apparents et Sensibles”. With assistance from his son Alexandre, he produced a two-volume set in folio, including 200 plates, published 1773-1796; and a nine-volume set in octavo, including 483 plates with descriptive text by Martinet, published 1787-1796.

Prints from this publication, “Les Plancehes Enluminees”, are extremely rare, featuring original hand coloring. These prints are printed on larger paper than those from “Histoire Naturelle Des Oiseaux”.