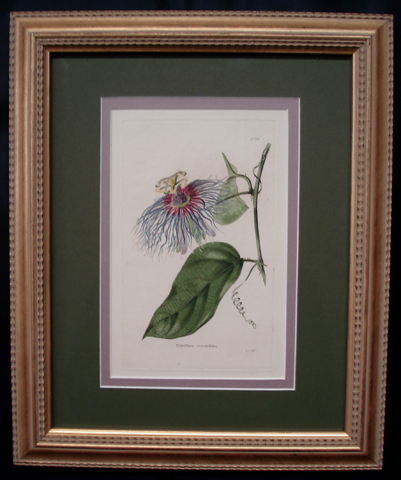 Conrad Loddiges was an illustrious English horticulturist, and a botanical publisher. Conrad Loddiges & Sons was one of the most famous plant nurseries in England, founded by Conrad who in 1771 acquired the established garden of John Busch. The nursery business flourished, becoming world famous for it’s collection of rare plants, and is recorded as being one of the nurseries which contributed plants to Curtis’s London Botanic Garden. It was also one of the earliest nurseries to cultivate orchids for sale, and they continued as the principal commercial orchid cultivators in Europe until 1852. The nursery was also noted for it’s production of Camellias, containing two greenhouses devoted entirely to them. One of Conrad’s greatest contributions to botanical illustration was the publication of the “Botanical Cabinet”, which comprised of 20 volumes, each with 10 monthly parts, containing a total of 2,000 plates. The plates were engraved by George Cooke, after original illustrations by various artists. The artists included Conrad’s two sons, George and William Loddiges, George’s daughter Jane Loddiges, George Cooke, E.W. Cooke, W.I Cooke, Thomas Shotter Boys, W. Miller, and P. Heath. There were two editions of this work published, a quarto edition, which is more rare, and an octavo edition, which was only partially colored.

Prints from this publication are finely engraved and beautifully hand colored.