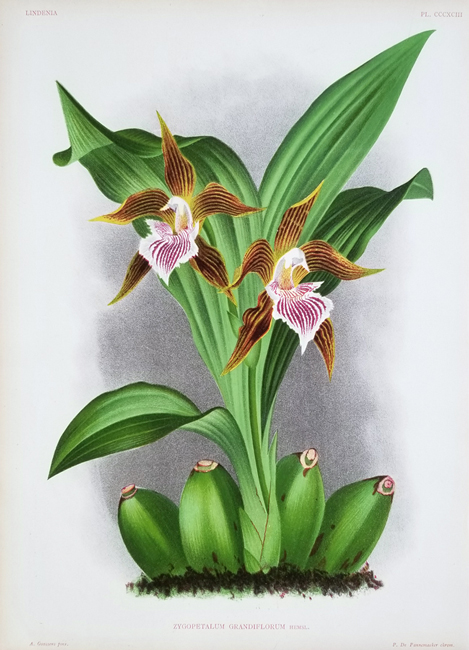 Originally from Luxembourg, Linden moved to Belgium where he became a famed “orchid hunter”. Linden traveled extensively all over the world to hunt and collect orchids in their native habitats, eventually collecting over a thousand orchids, which he then imported back to Belgium. He founded a nursery, Horticulture Internationale, in Brussels with his son. Together they devoted their lives to the science of Botany and Horticulture, and introduced a considerable number of orchids and other plants to Europe. They published this superb work “Lindenia, Iconographie des Orchidees” as a French edition in two parts from 1885-1906, which contained 814 colored plates. There was also an English edition published from 1891-1898 which contained 312 colored plates. The artist of these rare orchids was A. Goossens and G. Putzys, and the chromolithographer was P. De Pannemaeker.

These large orchid prints have accurate detail and vivid coloring.