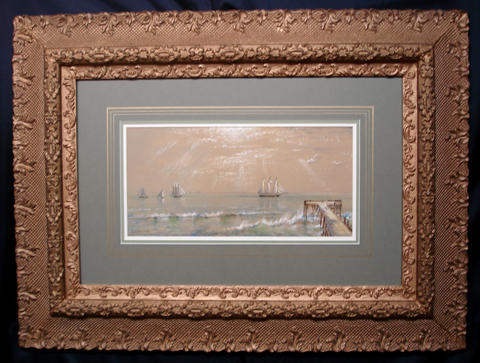 Edmund Darch Lewis was from a successful, well connected family from Philadelphia. He first exhibited at the Pennsylvania Academy of Fine Arts in 1854, and was later elected an Associate of the Academy in 1859. He also exhibited at the Boston Athenaeum and the National Academy of Design. He began his artistic career as a painter, later worked as an illustrator, and finally produced watercolors. His landscape paintings, concentrating on the mountain regions of Pennsylvania, the Delaware Water Gap, and picturesque features of New York were very popular. Lewis shifted to watercolors with a new attention to naturalism, shifting away from the grandiose vistas of his earlier oils, and began to represent the leisure life of the 19th Century, with games of polo and views of Atlantic City. He then moved to seascapes along shoreline farms, and later worked towards representing the sea as a balance of leisure life and the economic industry.

Edmund Darch Lewis works are rare, and are rarely offered for sale.