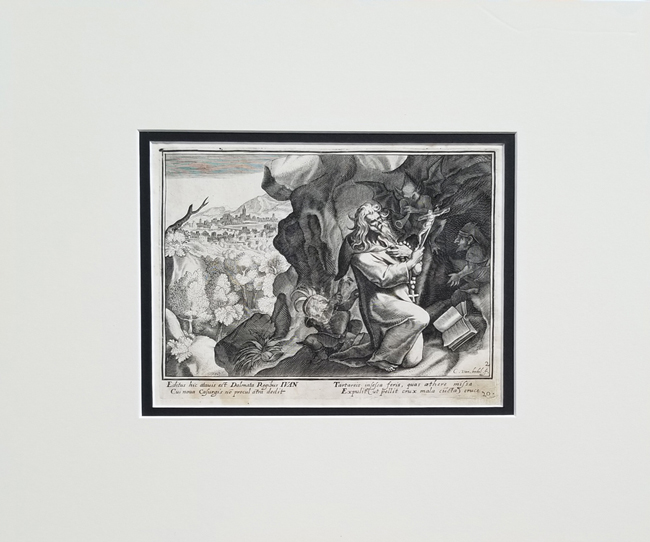 These prints, published by Jean le Clerc, are from the 1606 publication of Monumenta Anachoretarum, also referred to as Sylvae Sacrae. It was originally published in 1594 by Joannes and Raphael Sadeler after scenes designed by the famous Flemish artist Maarten de Vos, who was an important and influential artist in the pre-Rubens period.
Maarten de Vos (1532-1603) was a prodigious Flemish draftsman whose alluring Mannerist designs were engraved by the hundreds in Northern Europe. Once engraved, these drawings traveled throughout the Spanish empire, serving as models for very many works of art. At the end of the 16th century Maarten de Vos produced more than a hundred drawings of “anchorites”, men and women who chose to withdraw from society in order to lead a life focused on prayer, penance, and religious study. These drawings must have been immensely popular in their day, as they were quickly engraved in Antwerp and in Venice by three of the leading engravers of the time; Johan Sadeler I, Raphael Sadeler I, and Adriaen Collaert. These engravings were then engraved again, this time in reverse, and published in Paris by Thomas de Leu, Jean le Clerc IV, and Jacques Honervogt early in the 17th century.
Thomas de Leu was a Dutch engraver who started under the influence of Wierix and moved to Paris in 1576. He is regarded as one of the greatest portrait engravers of his time.
Jean le Clerc IV was an engraver and publisher that worked at a workshop located in Paris, rue Saint Jean de Letran, under the sign of the Royal Salamander. It was there that he published the engravings of the anchorites in the early 17th century in a series of volumes which bore the same titles as the ones in which the Sadelers published their own renditions of the designs invented by Maarten de Vos. One of these volumes was the Trophaeum Vita Solitariae, another was the Solitudo Sive Vitae Partrum Eremicolarum and a third was the Monumenta Anachoretarum, also referred to as Sylvae Sacrae.
Prints from this publication are extremely rare.