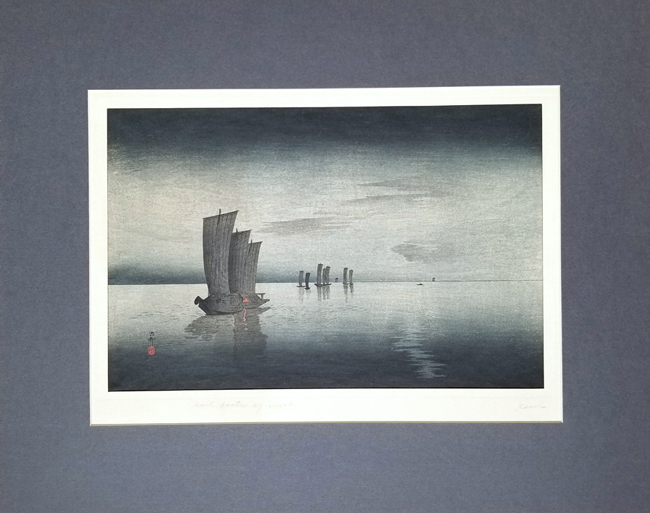 Japanese-style painter and printmaker, Ohara Shoson began as a student of Suzuki Koson. He painted flora and fauna between 1895-1902, before becoming recognized as a “Nihonga” painter in the ‘Kacho-ga’ (nature print) genre. During the Russo-Japanese war he produced a few ‘Senso-e’ (war prints). The majority of his early prints (1900 -1912) were published by Kokkeido and Daikokuya, and were designed for the foreign market. All were signed “Koson”. Between 1912-1926 he again devoted himself to painting. Using the name ‘Shoson’, he returned to the woodblock medium, collaborating with Watanabe. Shoson did produce some prints using the name “Hoson’ which were published by Kawaguchi between 1930-1931, but the majority of his prints were published by Watanabe. While the artist’s prints had always been sold abroad, his success in the West was assured as a result of the 1930 and 1936 Toledo Museum exhibitions. More prints by Shoson were sold during these shows than any other artists’ due to their artistic/decorative nature and the fact that they sold for one-quarter the price of the works of Yoshida and others. Shoson reached his peak in the mid 1930’s. His work is realistic, based mainly on his own sketches and watercolors. It is estimated that he produced more than 450 designs of birds.

Prints by Ohara Koson are rare