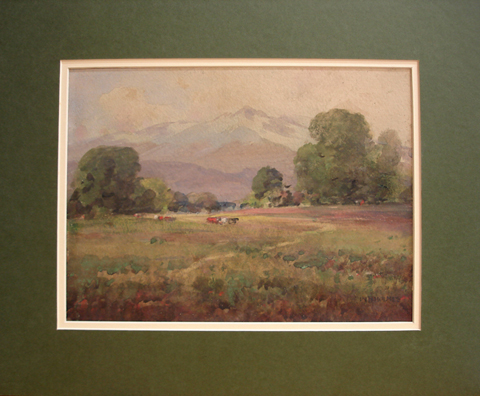 Born near the headwaters of Short Creek in Harrison County, Ohio, Holmes graduated from McNeely Normal College in 1870 and briefly went into teaching. In 1871, he went to Washington, D.C., to study art under Theodore Kaufmann. His talent soon came to the attention of the scientists at the Smithsonian Institution, notably Fielding Bradford Meek. In 1872, Holmes became an artist/topographer with the government survey of Ferdinand Vandeveer Hayden. He first trip out West was to the newly established Yellowstone National Park. During the 1870’s, Holmes gained a national reputation as a scientific illustrator, cartographer, and pioneering archaeologist and geologist. After the Hayden Survey was absorbed into the U.S. Geological Survey in 1879, Holmes went to Munich, Germany, to further his art studies under Frank Duveneck and to take lessons in “museum making” from Adolphe B. Meyer of Dresden’s Anthropology Museum. Upon Holmes’s return to the U.S., he was hired by the Geological Survey and assigned to Clarence Dutton as a geologist and illustrator. Holmes illustrated the atlas for Dutton’s Tertiary History of the Grand Canyon District (1882); his triptych panorama of the Grand Canyon from Point Sublime is a masterpiece of American scientific illustration. Holmes left the Geological Survey in 1889 to become an archaeologist with the Smithsonian Institution’s Bureau of American Ethnology. In 1910, he became chairman of the Division of Anthropology of the U.S. National Museum. In 1920, Holmes became the director of National Gallery of Art (now the Smithsonian American Art Museum), where he assembled exhibits of Indian arts from the Northwest Coast.