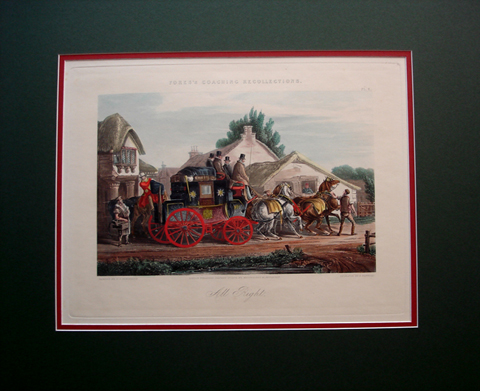 Charles Cooper Henderson was educated at Brighton and then Winchester before studying rather idly for the Bar, and enjoying a European tour with his father and elder brother, John. While his father and brother sketched panoramas, Cooper Henderson found more interesting subjects among the coaches, carriages and postillions on the road. On Christmas Eve, 1829, he was married secretly to Charlotte By, then aged sixteen. Disapproving of the marriage, his father gave him a small allowance and told him to leave London. Thrown mainly onto his own resources, Henderson moved to Bracknell in Berkshire and started to paint for his living. He was quickly successful and his pictures of coaches and coaching are well known, being more accurate and lively than those of his near contemporary, James Pollard. He soon received sufficient commissions to afford to return to London where he was reconciled with his parents.