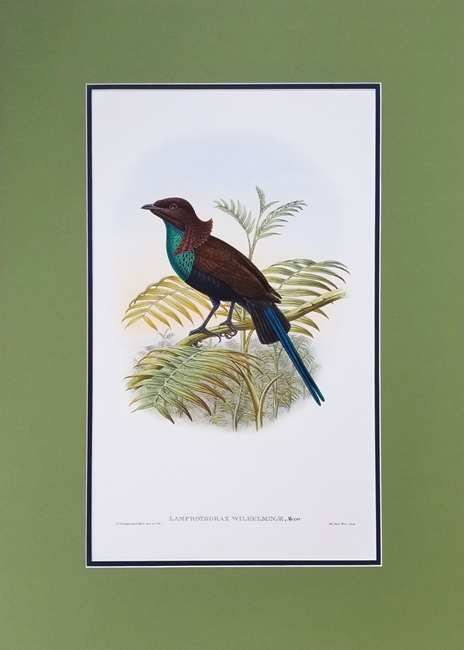 John Gould was without question the most prolific ornithological artist of the 19th Century, and the only one to rival John James Audubon in ambition and quality. The 19th Century was a time of intense fascination with discoveries in natural history, especially regarding knowledge of the wildlife of exotic lands. Gould shared the romantic enthusiasm of his time for such subjects, as well as the popular impulse to catalog. He learned taxidermy in his early teens at Windsor Castle, later becoming a taxidermist for the Zoological Society of London. In 1830, Gould received some exotic bird skins from the Himalayas, and shortly thereafter in 1831, he published his first work “A Century of Birds from the Himalaya Mountains”. This work, along with the first edition of “Ramphastidae” and “Birds of Europe” were enormously successful and allowed him enough capital to travel abroad. He went to Australia and New Guinea where he observed and sketched the native birds and mammals. From his sketches, artists, such as his wife Elizabeth Gould and Edwards Lear, transferred them to stone, hand printed and hand colored them with their masterful artistry. Gould combined his passion for natural history with outstanding scientific, artistic and entrepreneurial talents to embark on a series of projects that would eventually make him the leading publisher of ornithological illustrations in Victorian Britain. He created over three thousand plates of birds in over forty volumes. Gould himself described the coloring of the plates as follows:”Many of the public are quite unaware how the colouring of these large plates is accomplished; and not a few believe that they are produced by some mechanical process or by chromo-lithography. This, however, is not the case; every sky with it’s varied tints and every feather of each bird were coloured by hand; and when it is considered that nearly two hundred and eighty thousand illustrations in the present work have been so treated, it will most likely cause some astonishment to those who give the subject a thought”. His career spanned five decades and he produced a monumental series of rare publications of birds throughout the world, including “The Birds of Great Britain”, “The Birds of Europe”, “The Birds of Australia”, “The Birds of Asia”, “The Birds of New Guinea”, “A Monograph of the Paradiseidae” (Birds of Paradise), “A Monograph of the Ramphastidae” (Family of Toucans), “A Monograph of the Trogonidae” (Family of Trogons), and “A Monograph of the Trochilidae” (Family of Hummingbirds).
Gould died while his “Birds of New Guinea” was partially completed. R. Bowdler Sharpe was John Gould’s assistant for many years, and was the only person knowledgeable enough and sufficiently attuned to the famous ornithologists’ vision to complete several parts of this work. Sharp’s publication “Monograph of the Paradiseidae” (Birds of Paradise), published from 1891-1898, was a continuation of Gould’s “Birds of New Guinea”.