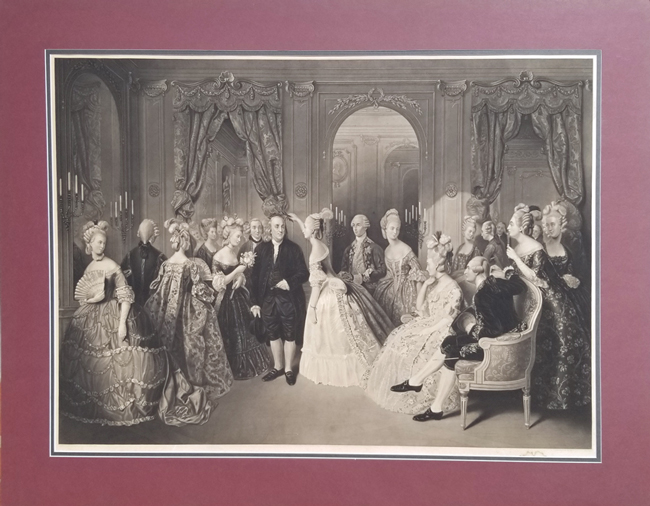 Franklin’s Reception at the Court of France, 1778. Engraved by W.O. Geller of London after Baron Jolly, Brussels, copyright by William Jay, Charles Hardenberg and William H. Emerson, Philadelphia, (1853). Elephant folio, 40-3/8″ x 29-7/8″, on chine colle paper. A very rare, uncolored “ARTIST’S PROOF”, one of two known examples, printed on chine colle, before the title was added at bottom. Signed by Geller, the engraver, in lower right margin. This exceptional oversized print “An American in Paris” shows the newly arrived American minister Franklin in simple Quaker dress (as opposed to the resplendent finery of the courtiers), receiving a laurel leaf from the hands of Diane, Countess de Polignac. In a splendid interior with candelabra and drapery are assembled 16 prominent members of the court including King Louis XVI (1774-1793), Marie Antionette, the Comte de Vergennes (a signatory with Franklin of the crucial treaty of alliance), Duchesse Jules de Polignac, Princesse Lamballe, Mme. Campan, and a host of Counts, Countesses and ladies-in-waiting. The occasion depicted is the court celebration of the signing of the long-awaited Treaty of Alliance and Commerce, signed February 16, 1778, which authorized overt French assistance to the beleaguered American colonies in their war against Britain.

A very large and rare, uncolored ARTIST’S PROOF, ONE OF TWO EXAMPLES PRINTED ON CHINE COLLE before the title was added at bottom. Signed by Geller, the engraver, in lower margin.