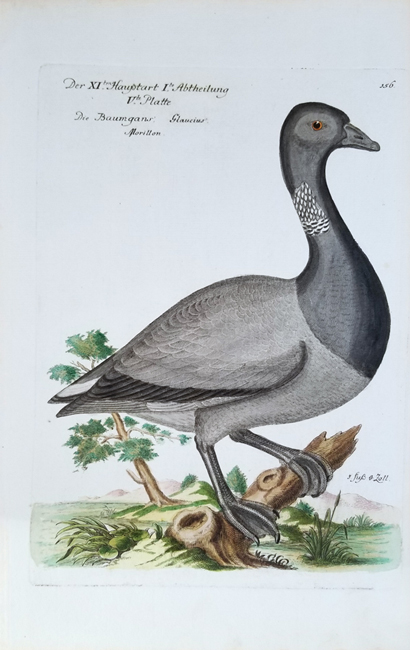 Johann Leonhard Frisch was a theologian, naturalist and philologist. After leaving school he made a living as a singer, an interpreter for the imperial army, a yard manager for an agricultural company, and a head-master of the Gymnasium ‘sum Grauen Kloster’ in Berlin. His varied career contributed to the breadth of his knowledge. With his linguistic skills, he produced a German-Latin Dictionary (encouraged by his friend Leibniz), and was a connoisseur of the Slavic languages. He traveled widely, grew silkworms, and sharpened and developed his powers of observation in his interest in natural history. He began collecting specimens of German birds, which formed the basis for his work Vorstellung der Vögel Deutschlandes und beyläufig auch einiger Fremden, published in Berlin, 1733-1763. This monumental work on German Birds contains a total of 255 hand-colored copperplate engravings (altogether 307 figures), and is considered to be the first great German color plate bird books. The work was started by Johann Leonhard Frisch, but it ultimately became a family project: Frischs sons; Leopold Frisch, who prepared the text; Ferdinand Helfreich and Philipp Jakob Frisch, who were responsible for drawing and engraving the plates; and following the elder Frischs death, his grandson Johann Christoph Frisch, who executed the last 30 plates.