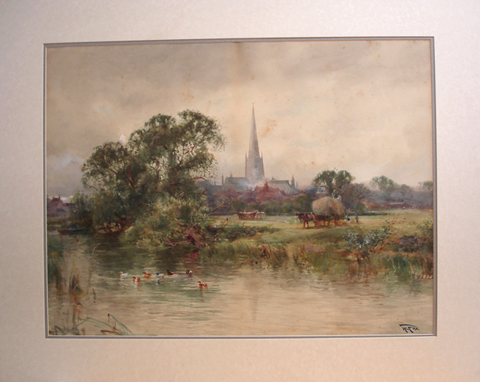 Henry Charles Fox was born in London in 1855. He is best know for his rural landscapes depicting people undertaking their daily work. In 1880 Fox had his first work accepted at the Royal Academy, and continued to show another 20 works at the Academy up to 1913. By this time he was an established artist and in addition to exhibiting at the Royal Academy, he also exhibited works at the Royal Scottish Academy, Royal Society of British Artists, Royal Hibernian Academy, Royal Institute of Painters in Watercolours, Glasgow Institute of Fine Arts, Royal Society of Artists Birmingham, Walker Art Gallery Liverpool, and Manchester City Art Gallery. Although he is most recognized for his watercolor works, he was also known to have painted in oils and completed a series of large etchings published by Gladwell Brothers of London in the 1880’s. The Gladwell also held an exhibition of Fox’s work entitled “Rural London – Sketches and Drawings” in 1885. By the 1920’s, Fox had moved to Billinghurst, Sussex and died in Horsham in 1929.