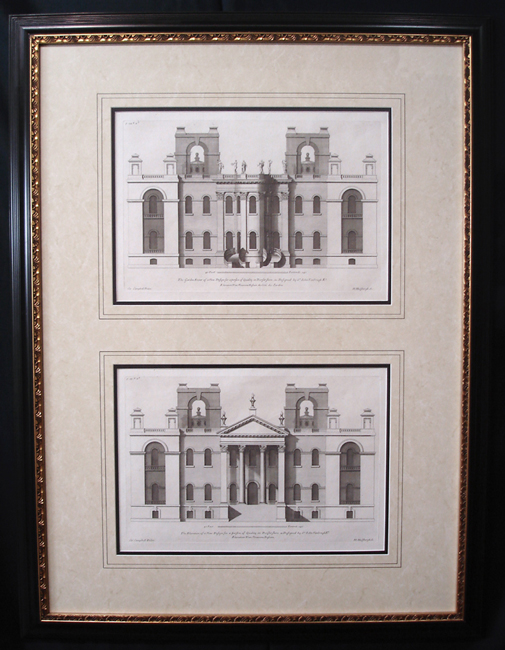 Sir Colin Campbell was an 18th century Scottish architect who published a series of large folio books, “Vitruvius Brittanicus” illustrating the chief buildings of 18th century England, with a focus on classical architecture. Campbell was influenced by many important architectural figures before him, leading to this significant publication. One such person being Marcus Vitruvius Pollio, a Roman architect and engineer. He was famous for his work, the “treatise De Architectura Libri Decem” (Ten Books on Architecture). His books included such various topics as material science, chemical engineering, acoustics, and civil engineering. Throughout the classical revival, Vitruvius was the authority studied by architects, and his ideas and practices were followed for centuries. The name of Vitruvius became synonymous with architecture, and was therefore given to later works on architecture. Another example was Andreas Palladio, a 16th century Italian architect who preferred the style and proportions of ancient Roman buildings, including such elements as columns and arches, and the use of the classical order. In the early 17th century, British architect and Surveyor-General under James I, Inigo Jones, traveled to Italy and discovered the works of Palladio. Inspired by Palladio, Jones was responsible for several very early classical building in England.

Sir Colin Campbell’s “Vitruvius Brittanicus” is widely recognized and considered one of, if not the most important books in British architectural history. Campbell was an assistant to the Earl of Burlington, and both were strong adherents to Vitruvian and Palladian classical architecture. While his involvement with “Vitruvius Brittanicus” was not until shortly before it was published, his discussion of Vitruvian and Palladian principles, with particular praise for the work of Inigo Jones, had enormous influence on the revival of Palladianism in England.

This series was published in five volumes, from 1715-1771, and contained several hundred plates over the 50 plus years. Vol.I (1715), Vol.II (1717), and Vol.III (1725) illustrated works by the architects Inigo Jones, Christopher Wren, Vanbrugh, Colin Campbell and others. Vol. IV (1767) and Vol. V (1771) were published much later by John Woolfe and James Gandon, and were a continuation of the work, illustrating drawings by Lord Burlington, William Kent, Ware, John Wood, Chambers, Adam and Paine.

Prints from this publication are rare, and are finely detailed.