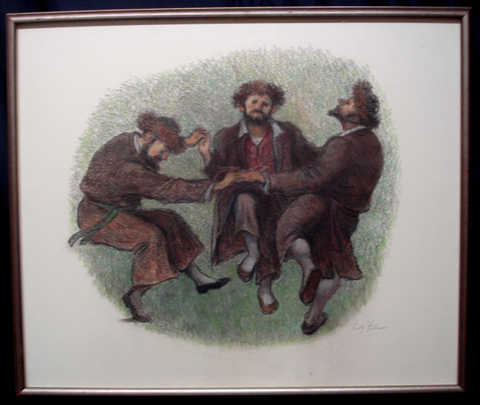 Tully Filmus was a Russian/American, son of Michael Filmus and Eva Gustoff. He attended schools in Philadelphia including Central High School, the Pennsylvania Academy of Fine Arts and the Barnes Foundation. In 1927 he studied in Europe on a Cresson Traveling Scholarship from the Pennsylvania Academy of Fine Arts. In the early 1930’s Filmus shared a studio with Willem DeKooning. He lived in NYC in the 1930’s and 1940’s, then moved to Great Neck where he lived with his family until his wife, Gladys, died in 1991. At that time he moved to Great Barrington to live with his sons. Filmus was a renowned artist; his work is in numerous private and public collections, including the Metropolitan Museum of Art, the Whitney Museum of American Art and the National Gallery. His works have been exhibited widely, including the Carnegie Institute, the Art Institute of Chicago, Corcoran Gallery, ACA Gallery and the David Findlay Jr. Gallery. During his early career he painted many portraits including ones of such notables as Eleanor Roosevelt and Dr. Jonas Salk. From 1938 to 1950 Filmus taught at Cooper Union School of Art. He also taught at the North Shore Community Arts Center, was a founding member of the Becket Arts Center, and lectured and donated his art for many charitable causes. People were the subject of most of his paintings including museum visitors, dancers, musicians and many works depicting Jewish subjects. He also painted numerous portraits of his wife, Gladys, to whom he was married for 52 years. Two books on Tully Filmus’ work have been published, Tully Filmus, a book of paintings and Tully Filmus, Selected Drawings. His biography is included in Who’s Who in American Art, Who’s Who in the East, Who’s Who in America, Current Biography and Who’s Who in the World.