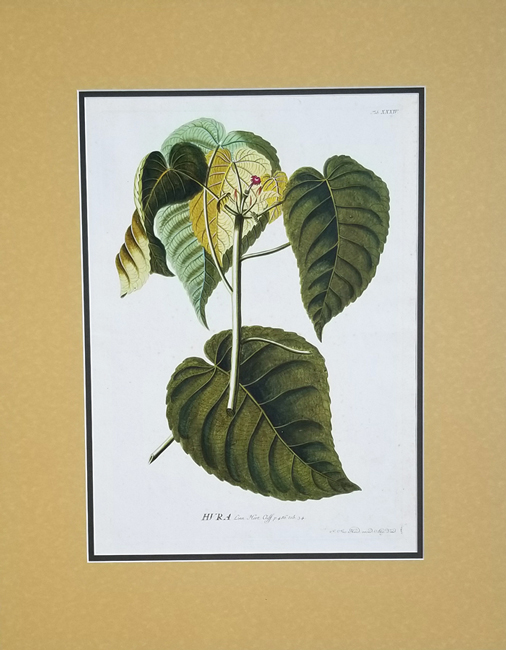 Georg Dionysius Ehret was born in Heidelberg, in 1710. He was the son of a market gardener who taught him to draw, and later worked as a gardeners apprentice, continuing his botanical drawings whenever possible. Gradually, his work became noticed, and after years of hardship he began to attract important admirers and patrons. Christoph Trew, a wealthy Nuremberg physician and botanist, had for a number of years been an admirer of Ehrets work. Trew became a lifelong friend and collaborator, eventually commissioning Ehret to create the illustrations for his most famous of botanical books, the “Plantae Selectae”, for which he wrote the text. Trew instructed Ehret on botany and provided him with good quality paper. Journeying through Switzerland and France, Ehret learned the technique of painting on vellum. Ehret was brilliant and unrivalled in his artistic ability, truly becoming the greatest of 18th Century botanical artists. He moved to London in the late 1730’s, where he painted the most recently introduced exotic plants at the Chelsea Physic Garden and established himself as a teacher of flower painting and botany. The “Plantae Selectae”, published in 1750-1773, was considered one of the greatest of all 18th Century botanical books and was a culmination of many years of collaboration between Ehret and Trew. The illustrations were chosen for both their exotic appeal and botanical interest, many of the tropical plants only recently having been introduced to Europe and were still unknown to the general public. The famous engravers Johannes Jacobus Haid and Johannes Elias Haid translated Ehrets beautiful and accurate watercolor studies into remarkable hand colored copper engravings.