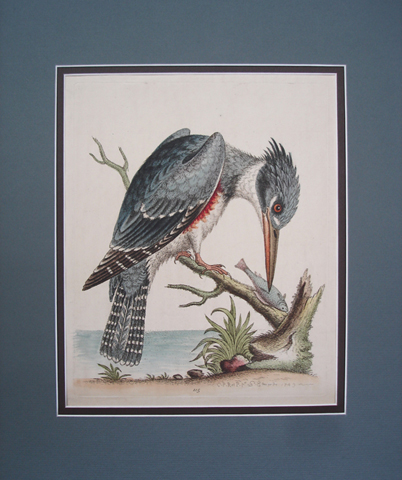 George Edwards was born in Essex England and became one of the most prominent ornithologists of his day, often referred to as the “Father of British Ornithology”. Edwards studied in Holland, but found his true vocation in 1718 when he traveled to Norway and studied the native birds living in the rocks and precipices there. He continued his studies in Holland and Brabant, and in 1773 was appointed Librarian to the Royal College of Physicians while creating his hugely successful series of colored drawings of animals and birds. Edwards took great care in etching the original drawings and personally supervising the coloring in order to assure accuracy in the finished product. This 4-volume work, “A Natural History of Uncommon Birds”, was published in 1743-1751, and then from 1758-1764 he produced 3 supplemental volumes entitled “Gleanings of Natural History”. The two series are often considered one work today, and the 7 volumes collectively contained engravings and descriptions of more than 600 subjects that had not before been illustrated or described. He also added a general index, complete with Linnaean names supplied by Linnaeus himself.