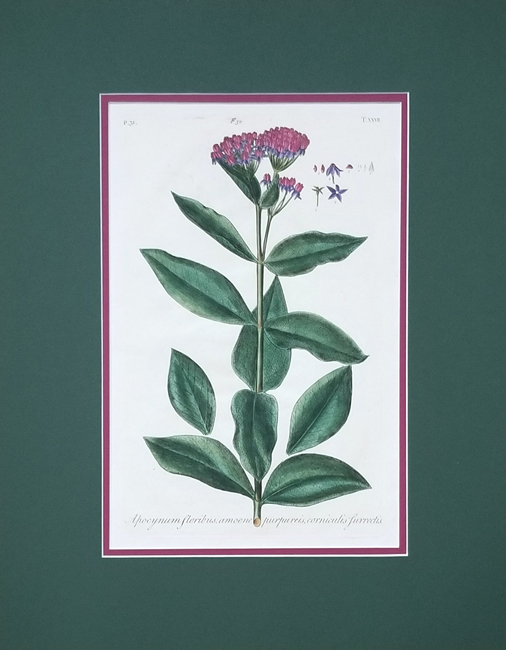 Dillenius was born at Darmstadt and was educated at the University of Giessen, where he wrote several botanical papers for the Ephemerides naturae curiosorum. In 1719 he printed his “Catalogus plantarum sponte circa Gissam nascentium”, illustrated with figures drawn and engraved by his own hand, and containing descriptions of many new species. In 1721, at the insistence of the botanist William Sherard (1659-1728), he moved to England, and in 1724 he published a new edition of John Ray’s “Synopsis Methodica Stirpium Britannicarum”. In 1732 he published “Hortus Elthamensis”, a catalog of the rare plants growing at Eltham, London, in the collection of Sherard’s younger brother, James (1666-1738), who after making a fortune as an apothecary devoted himself to gardening and music. For this work Dillenius himself executed 324 plates, and it was described by Linnaeus, who spent a month with him at Oxford in 1736, and afterwards dedicated his “Critica botanica” to him, as opus botanicum quo absolutius mundus non vidit. Linnaeus would later name a genus of tropical tree Dillenia in his honor. In 1734 Dillenius was appointed Sherardian professor of botany at Oxford, in accordance with the will of W. Sherard, who at his death in 1728 left the university 3000 pounds for the endowment of the chair, as well as his library and herbarium, all on the condition that Dillenius should be appointed the first professor. Dillenius, who was also the author of an “Historia muscorum (1741), died at Oxford of apoplexy. His manuscripts, books and collections of dried plants, with many drawings, were bought by his successor at Oxford, Dr. Humphry Sibthorp (1713-1797) and ultimately passed into the possession of Oxford University.

Prints from this Publication are Quite Rare