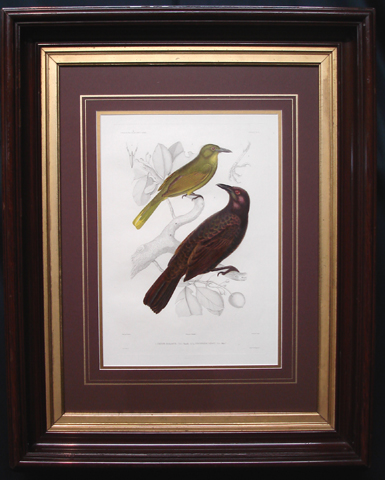 D’Urville was born in France in 1790, and studied numerous subjects such as botany, geology, astronomy, entomology, and linguistics. He was a navigator who surveyed and explored the Falklands, Oceania and the South Pacific on two voyages between 1822-1829. During his second circumnavigation of the world between 1837-1840, he penetrated the ice pack south of New Zealand and discovered the Adelie Coast region of Antartica, which he named for his wife. On this voyage, he reported on the geography, geology, anthropology and natural history of the region, describing and illustrating it in his immense work, “Voyage au Pole Sud et Dans L’Oceanie sur Les Corvettes L’Astrolabe et La Zelee”, published 1841-1854.

Prints from this publication are extremely rare, and feature exquisite original hand coloring. This is one of the few publications that can compare with the quality of Gould’s renowned hand coloring.