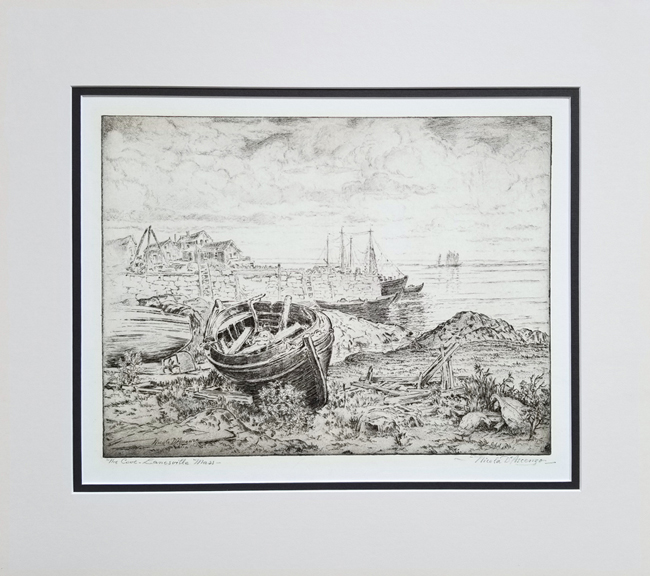 Nicola D’Ascenzo, founder of D’Ascenzo Studios in Philadelphia, was one of America’s foremost designers and manufacturers of stained glass windows and was often credited with helping to revive what was a dying craft. Born in Italy in 1871, Nicola D’Ascenzo first came to the United States in 1882. He studied at the Pennsylvania Museum School of Art, the Pennsylvania Academy of the Fine Arts, the New York School of Design, the School of St. Luca in Rome and the Senoia Liberra in Rome. D’Ascenzo was a versatile artist painting in oil and watercolor. His oils are delicately handled in an impressionist style with a soft glowing palette borrowed from the translucent colored windows he spent a lifetime creating. Having to paint first a watercolor study before crafting each window, D’Ascenzo was quite accomplished in this medium as well. He was also an etcher and muralist; however, he was most widely known for the magnificent stained glass windows he designed. A few of his well-known commissions include the Washington Memorial Chapel in Valley Forge, Pennsylvania; the Chapel of Princeton University; and the Chapel at Muhlenburg College. D’Ascenzo exhibited at the Pennsylvania Academy of the Fine Arts, the Columbian Exposition in Chicago (1893) and the Art Institute of Chicago. He was a former secretary of the Pennsylvania State Art Jury and an active member of the Philadelphia Board of Education from 1934-1948. D’Ascenzo attended the Pennsylvania Museum and School of Industrial Art (PMSIA) during the years 1891-92 and 1892-93. He also studied at the Pennsylvania Academy of the Fine Arts. Although D’Ascenzo’s name does not appear in any annual reports or commencement programs for having earned any of the certificates offered by the school, he appears in the Roll of Students, 1891-92 in the PMSIA catalog for 1892-93, and in the Roll of Students, 1892-93 in the PMSIA catalog for 1893-94.

Prints by this artist are quite rare