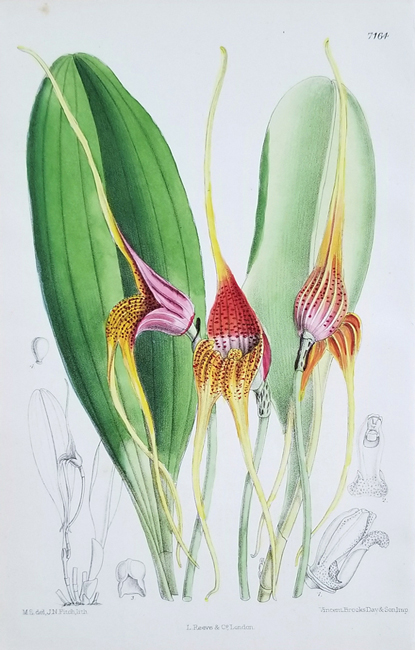 William Curtis was from a Quaker family with a strong medical background. He was trained in pharmaceuticals, apprenticed to an apothecary who left him his business, and at the age of 27, was appointed Demonstrator and “Praefectus Horti” to the Chelsea Society of Apothecaries. He later decided to concentrate on his true interest, natural history and botany, and became a well known horticulturist. Although most well known for “Flora Londinensis”, Curtis began publishing the popular and long lived “Botanical Magazine” in 1787. After Curtis edited the first 13 volumes, the publication continued under John Simms, William Hooker, and Joseph Hooker. The images were engraved and hand colored by many famous artists of the day, including Sydenham Edwards, William Graves, James Sowerby John Curtis, William Jackson Hooker, Walter Hood Fitch, Matilda Smith, Lillian Snelling and Stella Rose Craig. This third edition, from 1838-1904, contains illustrations by Walter Hood Fitch, one of the most celebrated and talented illustrators of the Victorian era. His edition is characterized by the inclusion of many exotic species from Africa, Asia and Australia. He was succeeded by his nephew, Nugent Fitch, whom he trained, and who continued in a very similar style.