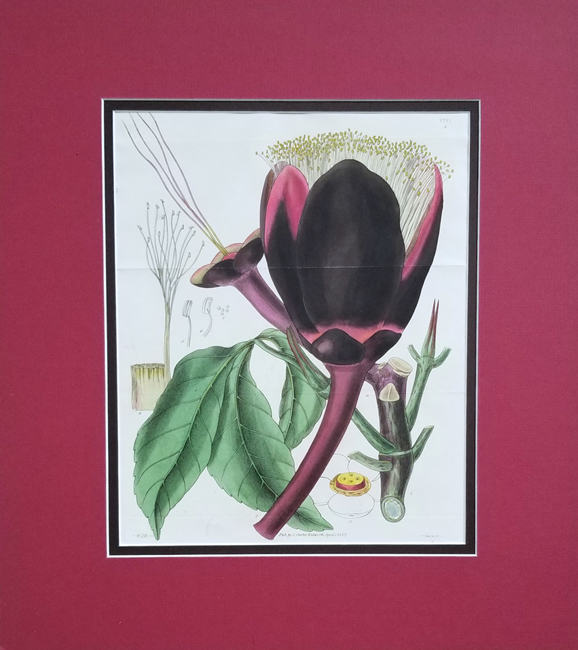 William Curtis was from a Quaker family with a strong medical background. He was trained in pharmaceuticals, apprenticed to an apothecary who left him his business, and at the age of 27, was appointed Demonstrator and “Praefectus Horti” to the Chelsea Society of Apothecaries. He later decided to concentrate on his true interest, natural history, his passion being botany, his forte being British flora. His first project was funded by Lord Bute and consisted of illustrations and descriptions of the wild flowers within a ten mile radius of London. He published the work “Flora Londinensis” in 6 parts from 1777-1798, featuring 435 species illustrated on 432 hand colored engraved plates, however, it was not a financial success. It was large, costly, and the plants illustrated, which grew wild around London, were considered by many to be not much better than weeds. The work was later released in an enlarged second edition from 1818-1828, by George Graves. Curtis also began the publication “Botanical Magazine” in 1787. It continued after his death for almost 200 years, and featured more than 10,500 fine plates, which until 1948 were all colored by hand. Curtis edited the first 13 volumes, and the publication continued under the editors John Simms, William Jackson Hooker, and Joseph Dalton Hooker. The fine, carefully executed plates of the earlier volumes were drawn by notables Sydenham Edwards, James Sowerby and others, and the main person responsible for the exquisite hand coloring was William Graves.