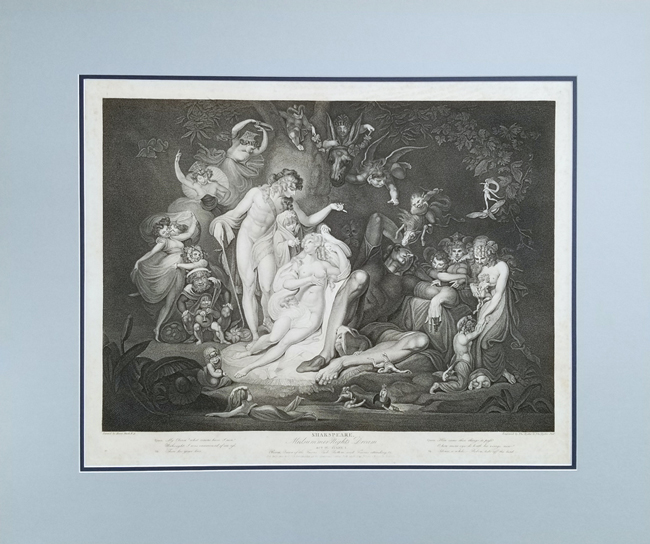 John Boydell was the primary leader in the English school of engraving in the late 1700s. A land surveyor in the employment of his father, he was inspired by an engraving by W.H. Toms to leave his home in Shropshire about 1750 and walk to London to apprentice himself to Toms. After six years, Boydell set up his own shop and began his career as a print publisher. He was much concerned with the French dominance of the European print market at mid-century, and mostly by his efforts, in the 1780’s Britain became a print exporting country. As part of his concern with making a profit and supporting British art, Boydell established the Boydell Shakespeare Gallery, an establishment dedicated to British paintings depicting scenes from Shakespeare’s plays. Boydell commissioned the paintings, put them on display in the gallery, and then published a folio work consisting of prints after 100 of the paintings in the gallery. Each print is expertly engraved and powerfully expresses the artistic inspiration that the subject provided. The engravers he commissioned were among the best of the day, including Thomas Burke, James Caldwall, Joseph Collyer, G.S. & J.G. Facius, Henry Fuseli, Thomas Gaugain, Gavin Hamilton, William Hamilton, Angelica Kauffman, Francis Legat, William Miller, Rev. Matthew W. Peters, George Romney, Thomas Ryder, Luigi Schiavonetti, Edward Scriven, Thomas Stothard, Isaac Taylor II, Robert Thew, and Richard Westall. The engravings are fascinating artistic expressions of the then current gothic interpretation of Shakespeare’s works. The gallery and the prints were a boon for British artists, giving them inspiration and publicity at the same time. As almost all the paintings have since disappeared, the prints take on added interest as the surviving record of this fascinating episode in British art history. This monumental work A collection of Prints from Pictures Painted for the Purpose of Illustrating the Dramatic Works of Shakespeare by the Artists of Great Britain, is unparalleled. Boydell began this impressive work in 1787 and invested over 100,000 pounds sterling to produce it. It was published by John and his brother Josiah in 1805. This work was truly Johns passion, and was subscribed to by the most wealthy art patrons of Europe.