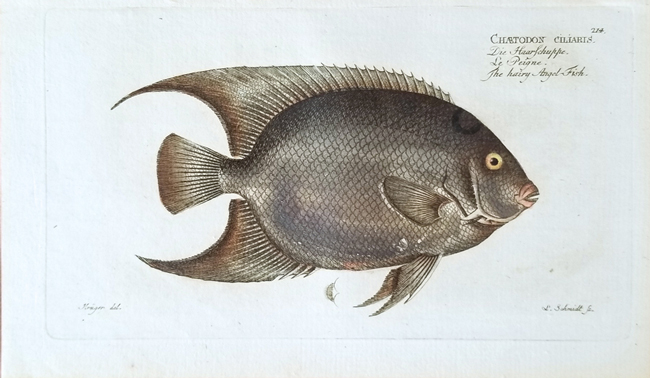 Marcus Bloch was born in Anspach, Germany and practiced as a doctor in Berlin. He later devoted himself to the study of natural history, particularly fish. In the tradition of the great naturalists of the period, Bloch accumulated his collection of specimens through local excursions, contacts in the marketplace and harbor, and correspondence. As his interest ranged beyond central Europe, he joined an existing network of scientific and scholarly contacts, who inspired him to attempt to describe and figure all the fishes of the then known world. His great work on fish, Ichthyologie, ou histoire naturelle, generale et particuliere des poisons, which was first published between 1785 and 1797, was the result. In this work, over 200 species were described for the first time by Bloch, and each specimen was engraved on copper and then colored by hand with watercolors.

Prints from the octavo edition of this publication are rare