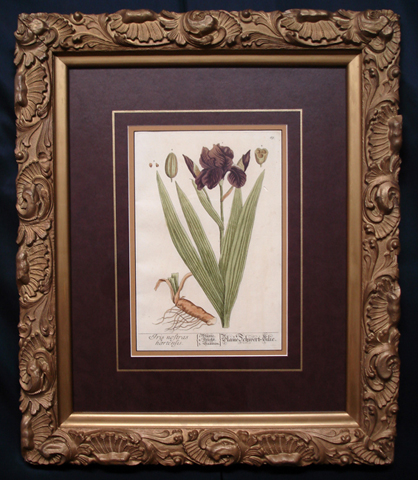 Elisabeth Blackwell was the artist and engraver of “A Curious Herbal”, published in 1737-1739. This work was conceived at the suggestion of Sir Hans Sloan, to raise funds for the release of her husband, Dr. Alexander Blackwell, from debtors prison, where he was imprisoned for setting up in the printing business without serving the required apprenticeship. She recognized the need for a definitive herbal and began working close to the Chelsea Physic Garden, with its abundance of beautiful flowers and herbs. Unusual for the time, Elisabeth not only illustrated the prints, but also engraved and hand colored them herself, not using the customary three separate craftsmen. Elisabeth was truly a pioneer in every way, as herbals were rare at the time, and she was the first woman to ever publish an herbal. Her husband helped with the process, assisting with the text, from prison and the book was a financial success. Elisabeth was able to obtain the release of her husband from prison, but sadly, he was later beheaded in Sweden in 1747 for high treason due to his involvement in a political assassination plot. Elisabeth died in obscurity in 1758. Her work of 500 plates is a jewel of artistry and a testament to the fortitude, industry, and entrepreneurship of a truly modern woman. This work was later reissued in a German version in 1757. The plates were re-engraved by Nicolaus Friedrich Eisenberger and printed in a larger folio size version. The German version includes longer text in Latin and German, and it added a sixth volume to Blackwell’s original 500 plates. Christopher Jakob Trew published this re-released work, attesting to the importance of Elisabeth Blackwell’s original work.