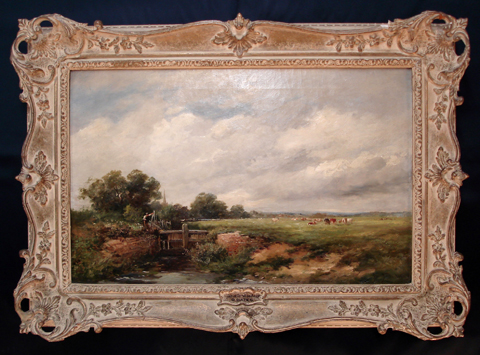 Born in Cambridgeshire, England, David Bates spent most of his early life in Worcestershire, where he became apprenticed at the Royal Worcester Porcelain Works. A painter in both oils and watercolors, Bates visited the Trading Company in North Africa before returning to paint landscapes of England, Wales and Scotland. Bates’ painting shows the influence of Benjamin Williams Leader (1831-1923). His works achieved much recognition, including that of Lord Leighton, the President of the Royal Academy, who purchased a snow scene of Hollymount Woods. Bates’ paintings are exhibited at the Royal Academy, Royal Society of British Artists, Grafton Gallery, New Watercolour Society Museum, and the Liverpool Museum. David Bates is a highly listed British artist.

David Bates’ works are rare, and are not offered for sale often. This painting is finely executed, and is beautifully detailed.