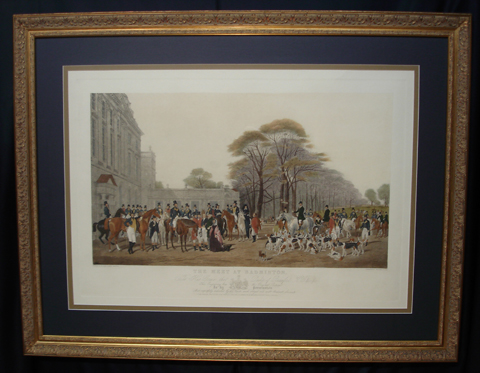 William Barraud (1810-1850) was the elder brother of Henry (1811-1874), both being renowned sporting artists. Together they collaborated on a number of paintings, several of which were exhibited at the Royal Academy. William painted the horses and dogs, while Henry painted the figures and landscapes. William’s relationship with Henry was close; they shared a studio together from 1835 until William’s death, and there it has been suggested that they operated as an official business partnership. Both brothers were principally sporting artists, but did occasionally produce history subjects as well as pure landscapes. Both brothers were very good artists, but William is deemed the slightly better of the two. William’s first picture was exhibited at the Royal Academy in 1828 when he was eighteen, and he continued to be a regular exhibitor there showing 58 times, in addition to 36 at the British Institute, 38 at the Royal Society of Artists in Suffolk Street, and 43 at various other venues. Several exhibitions were in conjunction with his brother Henry.