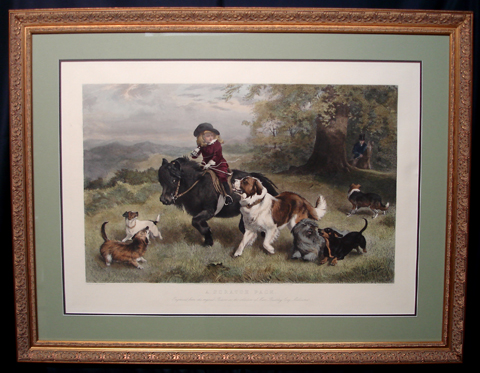 Charles Burton Barber is considered one of England’s finest genre and animal painters. By the age of 18, Barber was studying in London at the Academy Schools, and in 1866 exhibited his first work at the Royal Academy. He became a highly sought after artist, and in the early 1870’s Queen Victoria commissioned him to paint her favorite dog. In the year 1883, he painted “Off to School”, and was elected a member of the Royal Institute of Painters. Throughout his life, Barber was a frequent exhibitor at the Royal Academy, Royal Institute of Oil Painters, Walker Art Gallery, Manchester City Art Gallery and the Fine Art Society. Barber was once again commissioned by Queen Victoria, this time to paint her pony-carriage surrounded by her grandchildren. This would be his last commission as he passed away soon afterwards. Many of Barber’s paintings were later available as engravings by various noted engravers.

This is a very large hand colored framed engraving