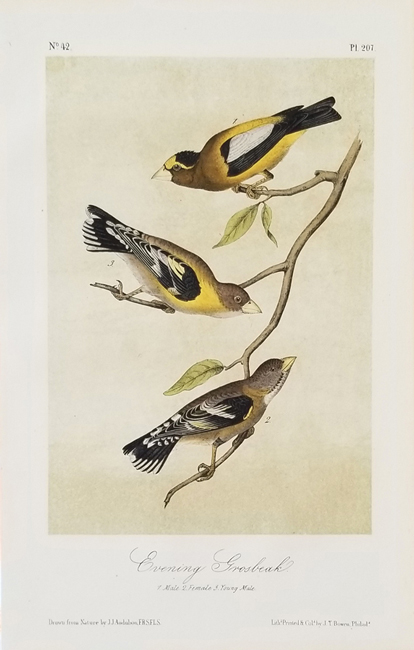 John James Audubon, America ‘s most famous naturalist, was born in Les Cayes, Santo Domingo (now Haiti ), on April 26, 1785 . His father was a French sea captain, Jean Audubon, and his mother, Jeanne Rabine, was a servant. After his mother died, his father brought him to his home in Coueron , France , a small town near Nantes , where he was raised by his father and step-mother. He was given a formal education; however, his passion was exploring and drawing birds and their nests. In 1803 he was sent to the United States to avoid Napoleon’s draft and to run a farm in Mill Grove near Philadelphia that his father had purchased in 1789.As a naturalist, his interests were traveling, collecting, and drawing interesting specimens, not in running the farm. He, therefore, lost the farm. While in Mill Grove, he met and befriended Lucy Bakewell, who he married in 1808. Audubon knew great financial hardship as his interests were not marketable. The family eventually settled in New Orleans after living in Kentucky , and Audubon found he could make some money drawing portraits and as a taxidermist. He met Alexander Wilson in 1810 and a decade later Audubon developed the idea of publishing his drawings as engravings. Lacking support in America for his grand project, he left for England in 1826 arriving in Liverpool where he found support for his idea to publish 500 engravings of the Birds of America in life size. The first engraver selected for the project was William H. Lizars, a prominent natural history engraver in Edinburgh . Audubon’s project was on a grand scale, not only did he want the images to be life size, but he wanted them to be the grandest ornithological work ever published. Lizars was not up to the production demands and produced only a small number of engravings. The project was shifted to London and to one of the most talented aquatint engravers, Robert Havell, Jr. It is interesting to note the distinction between the two engravers, William H. Lizars’ work was as a pure engraver and Robert Havell, Jr. was not just an engraver but a talented master of aquatint, an etching process to add tone and shading to a copper plate. Robert Havell’s talent, his ability to produce a high quality print, quickly suited Audubon and his backers. Between the years 1827 and 1838, 435 aquatint engravings were produced. By the end of the project Audubon had about 175 subscribers, and it is estimated that the total number publisher was around 200. That means that Robert Havell pulled 87,000 impressions of these mammoth plates in eleven years The Birds of AmericaOctavo edition. Published in New York , 1840-1844 (First edition), there were many subsequent editions). Issued in 100 parts of 5 plates each, the 500-handcolored lithographic plates illustrated all the birds and species of the double-elephant folio edition; however, each species had their own sheet. Average paper size is 6-1/2 x 10 3/4 inches. In later editions more of the prints are printed in color rather than handcolored.