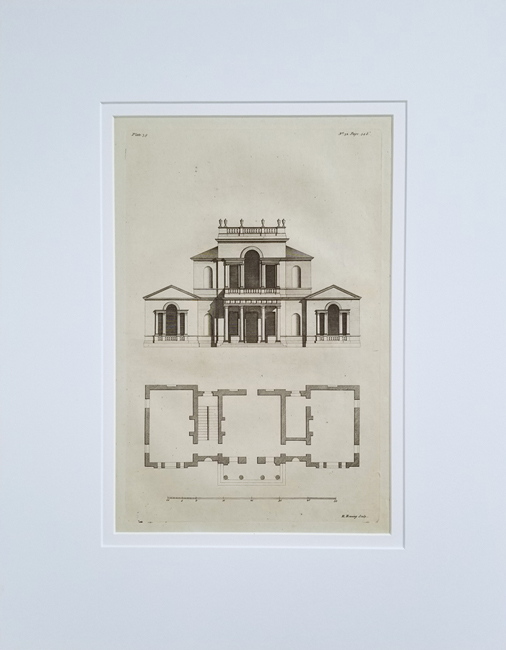 Isaac Ware (1704 1766) was an English architect and translator of Italian Renaissance architecture. Ware was born to a life of poverty, living as a street urchin, and working as a chimney sweep. Reportedly he was drawing on the pavement of Whitehall whereupon Richard Boyle, 3rd Earl of Burlington, recognizing the talent, intelligence and personality, took him into his own household. At age 8, he was adopted by Boyle and was groomed and educated as a young nobleman. His subsequent education included a grand tour of Europe, and study of architecture. He was apprenticed to Thomas Ripley in 1721, and followed him in positions in the Office of Works, but his mentor in design was Lord Burlington. Ware was a member of the St. Martin’s Lane Academy, which brought together many of the main figures in the English Rococo movement, among them Louis Francois Roubiliac who sculpted Ware’s portrait bust in 1741. Ware was dissatisfied with the first English translation (done by Giacomo Leoni) of Andrea Palladio’s I Quattro Libri dell’Architettura, and in particular Leoni’s illustrations. In 1738 Ware published his translation illustrated with his own careful engravings. Ware’s version of the Four Books of Architecture remained the best English translation into the twentieth century in the opinion of Howard Colvin. Having thoroughly assimilated Palladian theory, observed Colvin, he looked beyond it and in the 1740’s he helped to dissolve the dictatorship of taste that Burlington imposed in the 1720’s. Aside from his Chesterfield House, Westminster (1747-52, demolished 1937), with its Palladian exterior and rococo interior details, he engaged in speculative building in the West End of London. He built a small number of country houses, most of which have been subsequently remodeled or demolished. Clifton Hill House, Bristol, and Wrotham Park, Hertfordshire survive.

Prints from this publication are becoming quite rare