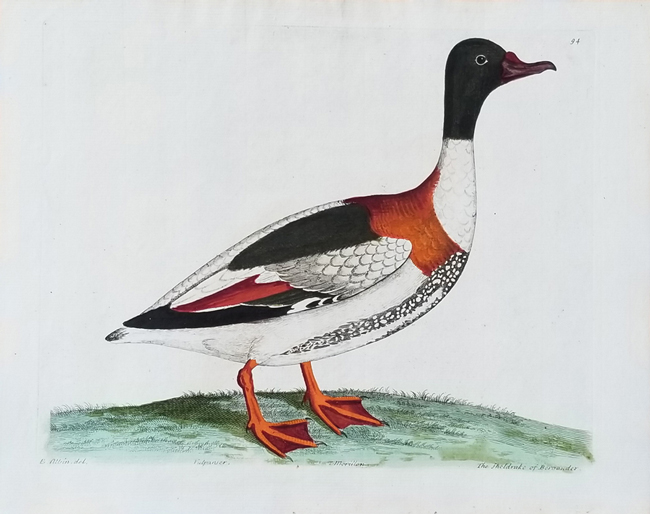 Eleazar Albin was a German professional painter who settled in England in 1707, changing his name from Weiss to Albin. He illustrated works on insects, spiders and birds, earning his living by producing commissioned watercolors of his wealthy patron’s collections. One such patron was Sir Hans Sloane, a leading figure in the establishment of British institutions devoted to the study of natural history, and whose own collections founded the British Museum.Albin’s work on birds, The Natural History of Birds, 1731-1738, was produced later in life and was the first large English ornithology folio to be illustrated exclusively with hand colored plates. It was later re-issued in a French edition from 1735-1751 titled Histoire Naturelle des Oiseaux. The work contained mainly native British species as well as a few from distant regions brought to his attention. Albin first produced watercolors, which he then engraved and hand colored with the help of his daughter Elizabeth. Although it was Elizabeth’s primary responsibility to color the plates engraved by her father, she was known to have drawn and engraved between 7 – 40 plates of her own. Elizabeth was the first English woman recorded as a painter and delineator of birds. Besides Albin’s Natural History of Birds, he also published A Natural History of English Insects. Albin’s original watercolors, on which he based his engravings, are house in Marsh’s Library in Dublin, Ireland.